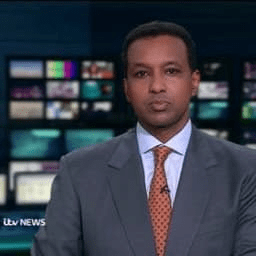 Rageh Omaar is a British media personality serving as ITV’s International Affairs Editor and the presenter of ITV’s current affairs programme On Assignment. Previously, he was a Senior Foreign Correspondent for the BBC. On September 19, 2022, Omaar will be with the armed forces at Wellington Barracks reporting on Queen Elizabeth II: The State Funeral.

Omaar was educated at the Dragon School, Oxford, and Cheltenham College in Gloucestershire. He then studied Modern History at New College, Oxford.

Omaar is the son of Abdullahi and Sahra. He was born in Mogadishu, Somali Republic. However, he went to London when he was six years old in 1973 to have a good education.

His father was an accountant before setting up his businesses. He had a contract to represent Massey Ferguson tractors, introduced Coca-Cola to Somalia, and started the country’s first independent newspaper.

His mother is one of 12 children – all girls except for one boy.

Even though Omaar’s father started a newspaper, he tried to discourage him from becoming a journalist.

“He thought it wasn’t a serious profession. He wanted me to study law and I was close to becoming a barrister. We struck a deal: I said I’ll try to become a journalist and if it doesn’t work after a few years, I’ll go ahead with law. He lived to see that I made it and he was proud – and happy in the end. He said I had made the right choice,” Omaar says.

“I dealt with his death by trying to talk about it with my family and we always mark his anniversary,” he says.

Omaar has four siblings. His elder brother, Mohamed Abdullahi, was a former Foreign Minister of Somalia.

“I see my children as independent young people. My parents taught me to be independent and to think independently. My father thought that independence gives you a sense of worth and strength,” Rageh says.

Rageh is ITV’s International Affairs Editor, responsible for covering major news stories across the world. He is also the presenter of ITV’s current affairs programme On Assignment. As a leading international news presenter, he has reported some of the highest-profile global events for 15 years.

Rageh was a senior BBC foreign correspondent, coming to global prominence as the face of BBC Television News during the invasion of Iraq and the fall of Baghdad in 2003. During the conflict, his reports were syndicated across the United States by ABC News.

He has won numerous international awards including a Peabody Award for his reports for the BBC from Darfur and a BAFTA for the BBC’s coverage of the invasion of Afghanistan in which he was the only western TV journalist to report from inside Taliban-held Kabul.

Most recently, Rageh was a journalist and presenter for Al Jazeera, working on investigative news and documentary programming, including Witness and The Rageh Omaar Report.

He is a regular contributor to a number of broadsheet newspapers and the author of two books; Revolution Day: The Real Story of the Battle for Iraq and Only Half of Me: Being a Muslim in Britain.

ITV has announced its plans for the coverage of the state funeral of Queen Elizabeth II on Monday 19 September 2022 from Windsor Castle and Omaar has been chosen as one of ITV’s royal reporters.

Tom Bradby and Julie Etchingham will host Queen Elizabeth II: The State Funeral, which airs from 9.30 am on Monday 19 September 2022 from Windsor Castle.

ITV News will produce the broadcast with reporters leading coverage from key locations including Westminster Abbey, The Mall, and Wellington Barracks.

Starting at 9.30 am, a special programme titled Queen Elizabeth II: The State Funeral will guide viewers through the historic day, covering the funeral service at Westminster Abbey, the mile-long military procession escorting the Queen through London, the Queen’s final journey to Windsor and the committal service at St George’s Chapel.

Tom and Julie will be joined by a number of special guests and royal experts for their reflections and analysis of this historic moment.

Mary Nightingale will lead coverage from Westminster Abbey, while Royal Editor Chris Ship will be in London and Windsor. Omaar will be with the armed forces at Wellington Barracks while Nina Hossain will be on the Long Walk in Windsor speaking to people paying their respects. Charlene White will be with mourners in London.

All of the day’s programming from 6 am to midnight will be simulcast on all of ITV’s main channel and five digital channels and hub – the first time in its history ITV has done so. Additionally, the coverage will be preceded by Good Morning Britain which will preview the funeral.

The special programme will be followed by the ITV Regional News and an extended Evening News.

Moving into the evening, at 7.30 pm ITV will broadcast a documentary film, Queen Elizabeth II: A Nation Remembers, chronicling the events of the past ten days from Her Majesty The Queen’s death to the state funeral. At 9 pm, there will be a further special documentary programme, Queen Elizabeth II: The Final Farewell (w/t) focusing on the day’s events, narrated by ITV News’ James Mates as the nation says goodbye to a most extraordinary woman and the longest-reigning sovereign. This will be followed by an extended News at Ten presented by Tom Bradby.

Rageh Omaar Salary and Net Worth