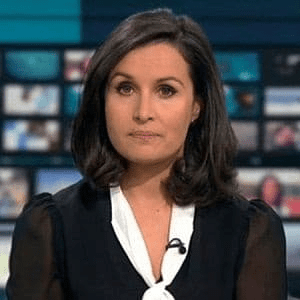 Nina Hossain is a media personality serving as a reporter on ITV News. She was employed by ITN as the lead presenter of the ITV Lunchtime News. Previously, she was the sole presenter on ITV News. Nina will be part of the ITV team that will report on Queen Elizabeth’s state funeral at Westminster Abbey.

Hossain is tall in stature but her height is undisclosed.

Hossain has a degree from the University of Durham, (St Cuthbert’s Society). She then gained a postgraduate diploma in broadcast journalism at the department of Journalism, Media, and Communication, University of Central Lancashire, Preston.

She was born in Huddersfield, West Yorkshire, to a Bangladeshi father and an English mother – her father, Tabarek Hossain migrated to Britain in the 1960s. However, there is no more information on her sibling’s identities.

Hossain is currently in a relationship with Stuart Thomas whom she has been together since 2005. The duo has been blessed with three children: Clara Thomas, Wil Ridley Thomas, and Nate Thomas.

Previously, she was married to her former husband Craig O’Hara in 1996. Their relationship continued for four years and turned into a divorce in 20004.

Nina joined ITV Evening News in 2004 and has since presented on ITV London, News at Ten, and the Weekend Bulletins. Her ambitions to be a journalist began at an early age.

In 1996 she was chosen for a traineeship at ITV Border on Lookaround where she was a news presenter, producer, and reporter. In 2000 she was a presenter for The Medical Channel. In 2001 she became a presenter and reporter for Newsroom South East and BBC London News on BBC London. In March 2004 she became the main presenter on the program whilst Emily Maitlis took maternity leave.

She was the word pronouncer for Series 1 of Hard Spell, a BBC One spelling competition for children. She reprised this role in the one-off episode of spin-off Star Spell (similar to Hard Spell, but with celebrities instead of children), but when Star Spell became a full series, she had joined ITV and so was replaced by BBC newsreader Mishal Husain, who continued this role through the second series of Hard Spell.

April 2010, she was also a guest presenter for GMTV, standing in for Lorraine Kelly on GMTV with Lorraine. In June 2010, she replaced Katie Derham as a presenter of London Tonight, initially alongside Donal MacIntyre. However, on 1 November 2010, she became the sole presenter. She also presented the ITV Lunchtime News in a shared role with Alastair Stewart.

On 24 May 2019, it was announced Hossain would leave ITV News London and become the lead presenter of ITV Lunchtime News. She presented her final ITV News London 6 pm bulletin on 19 June 2019.

ITV has announced its plans for the coverage of the state funeral of Queen Elizabeth II on Monday 19 September 2022 from Windsor Castle and Hossain has been chosen as one of ITV’s royal reporters.

Hossain is stepping out of the studio as she prepares to report on Queen Elizabeth’s state funeral at Westminster Abbey.

She will be talking to people paying their last respect to the queen while taking a long walk in Windsor.

Nina Hossain Salary and Net Worth