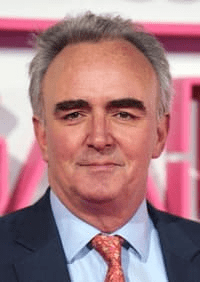 James Mates is an English media personality serving as ITV News presenter and Europe Editor. On September 19, 2022, James will narrate a special documentary focusing on the funeral of Queen Elizabeth II on ITV. Previously, he was a Senior correspondent for ITV News.

James studied at Marlborough College, an independent school in the market town of Marlborough in Wiltshire. He then moved to Farnham College in Farnham, Surrey at the age of 16 where he sat for his A-levels.

In 1983, James graduated from the University of Leeds with a degree in International History and Politics. During his time at the university, in 1981, he spent his summer holidays working as a researcher for U.S. Republican Senator John Tower on the Senate Armed Services Committee.

James is the son of Conservative Party MP Michael Mates. His father has been married three times: to Mary Rosamund Paton in 1959, divorced 1980; Rosellen Bett in 1982, divorced 1995; and Christine Robinson-Moltke in 1998.

Mates is married to his wife Fiona and lives in London with his wife and three children: Leo, Flora, and Charlie.

He enjoys playing bridge and plays mostly at the Andrew Robson Bridge Club in West London. He started playing bridge around the kitchen table with his girlfriend (now wife) and her friends. His best achievement in bridge was qualifying for the national finals of the North American Pairs in Vancouver, in 1999.

Mates works at ITV, where he presents ITV News and is the Europe Editor – focusing on the future of the EU and what it means to the UK. He joined the ITV newsroom in 1983, as an editorial trainee and was appointed scriptwriter two years later. He was then made a general reporter at ITV in 1986 and one of his first assignments as a reporter was to cover the Zeebrugge ferry disaster.

Mates spent five weeks in Zeebrugge in 1987 during the operation to raise the capsized ferry ‘Herald of Free Enterprise’.

In 1989 Mates was made Tokyo correspondent of the World News on Channel 4’s first early morning service, Channel Four Daily. In 1991 Mates was North of England correspondent for ITV, and later that year became Moscow correspondent, a role he kept until 1993. During his time as a Moscow correspondent one of Mates’ reports, on the use of ice as an anesthetic in a Russian hospital, was awarded the Prix du Press Club de France at the 7th International Scoop & News Festival of Angers, France. The same story, together with a report on the Russian economy, won Mates a silver medal at the 35th Annual Film & Television Festival of New York City. Between 1993 and 1996 Mates was ITN’s Diplomatic Editor.

His many assignments have numbered Kosovo, where he was during the NATO invasion of the country; former Yugoslavia where he covered the 1996 refugee crisis; Moscow during President Yeltsin’s attempt to put down the uprising in Chechnya; and Rwanda where he reported on the Central African Republic’s genocidal civil war. As the only television journalist left in the capital Kigali in 1994, Mates watched the city fall to the rebel army of the Rwandan Patriotic Front. He also reported on the slaughter of countless soldiers and civilians and the plight of the 700,000 refugees who fled the carnage. ITV News won a BAFTA for its coverage of the genocide.

He also won a joint Silver Medal from New York for his 1996 coverage of the refugee crisis in former Yugoslavia. Just before covering the war in Rwanda, Mates had been in South Africa reporting on the first-ever democratic elections in the country, which culminated in Nelson Mandela’s inauguration as President.

Mates was Washington’s correspondent between 1997 and 2001. In 2001 he was awarded the title of “Senior Correspondent” for ITV News. He also played a key role in ITV News coverage of the September 11 attacks, reporting from New York and Washington in 2001.

In January 2012, Mates became “Europe Editor” for ITV News, focussing on the future of the EU and what it means to the UK.

As the nation mourns the loss of her Majesty, Queen Elizabeth II, ITV has announced its plans for the coverage of the state funeral on Monday 19 September 2022.

ITV presenter James will narrate a special documentary focusing on the funeral of Queen Elizabeth.

James Mates Salary and Net Worth