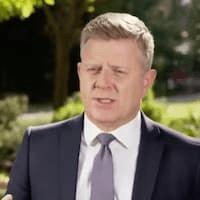 Chris Ship is a media personality serving as a broadcaster,  journalist, ITV Royal Editor, and reporter on ITV. Previously, he was a royal editor on ITV. On 19 September Chris will be attending Queen Elizabeth II’s burial to give reports on the occasion.

He is secretive on matters concerning his personal life. Therefore, he has not disclosed the date, month, and year he was born

Ship is tall in stature but his height is undisclosed.

He was brought up in Southampton in Hampshire, and educated at Bellemoor School for Boys (since renamed Upper Shirley High School), a state comprehensive school in the city, where Craig David was a pupil, followed by the University of Sussex, where he studied Media and French.

Ship was born and raised by his parents in Harmshere. However, he has not revealed information concerning his parents’ and siblings’ identities.

Chris is an English journalist and presenter, working for ITV News. Since 2017, he has been the Royal Editor.

Since early 2009, he has been a presenter of ITV Weekend News. Chris was given a new title of Deputy Political Editor in 2012.

On 13 December 2016, it was announced he is to become Royal Editor from 2017, replacing the retiring Tim Ewart.

Since September 2019 he has also been an occasional relief presenter of the ITV Lunchtime News.

Chris is best known for reporting on the Royal Family across TV and digital for ITV News. He is also the host of The Royal Rota, the ITV News podcast

He will be vital in leading ITV’s Queen Elizabeth II’s funeral coverage. He will be in London and Windsor to follow the queen’s burial giving reports on the schedules according to the program. Sunday 19/9/2022. “The coffin carrying the queen will travel from Balmoral to the palace of Holywood house when she would lie- to -rest so as staff to pay their last respect.

He has reported on all significant Royal Family occasions, including the 2018 wedding of Prince Harry and Meghan Markle

His annual salary is under review.