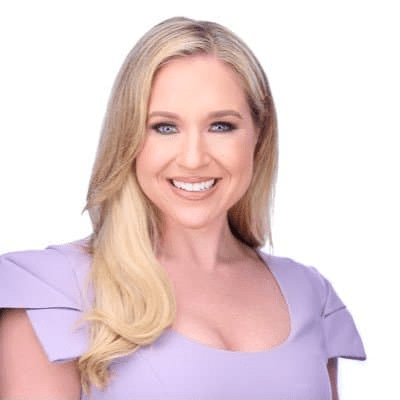 Vicki Graf is a media personality serving as a meteorologist on the weekend evening newscasts for WFXT Boston 25 News. She also contributes to Boston 25’s weekday forecasts. She joined the Boston 25 Weather team in May 2018. Previously, she worked at WSOC in Charlotte, NC.

Graf was born in 1986 in Marblehead, Massachusetts, United States making her 37 years old as of 2023.

Graf graduated from Embry-Riddle Aeronautical University with a Bachelor’s degree in Meteorology in 2007.

Vicki is a graduate of Embry-Riddle Aeronautical University in Daytona Beach, FL where she earned a bachelor’s degree in Applied Meteorology. She is a member of the American Meteorology Society, National Weather Association, Chi Epsilon Pi Meteorology Honors Society, Omicron Delta Kappa, Order of Omega and Alpha Xi Delta Sorority.

Graf’s mother is Debbie. She was born and raised in Marblehead, Massachusetts. She has three siblings an elder brother, a sister named Elizabeth Keithley, and another brother named Bryan Graf.

Despite being a media personality Vicki has managed to keep her marital status away from the limelight. Therefore, it is not known whether she is married, single, or in a relationship.

Vicki is a meteorologist on the weekend evening newscasts and contributes to Boston 25’s weekday forecasts. She joined the Boston 25 Weather team in May 2018. She is also a Certified Broadcast Meteorologist (CBM) and holds the National Weather Association Seal of Approval (NWA).

Vicki grew up in Marblehead and credits her 4th-grade teacher for helping her gain interest in weather at an early age. She took a specific interest in tropical systems when Hurricane Bob ravaged New England back in 1991.

Before WFXT, Vicki worked at WSOC in Charlotte, NC where she was part of an Emmy-nominated weather team. Prior to that, she worked in Augusta, GA where she was awarded ‘Best Weather Reporting’ by the Georgia AP for outstanding coverage during an outbreak of severe weather and a rare winter snowstorm. She also spent time as the Chief Meteorologist for WDHN in Dothan, AL. Vicki also worked for Weather Services International (WSI) located in Andover, MA.

When Vicki is not forecasting the weather, she enjoys staying active. She used to be a gymnast but now enjoys running. Vicki has completed 4 marathons and hopes to run the Boston Marathon someday. She is excited to be back home near her family with extra time to explore more of New England.