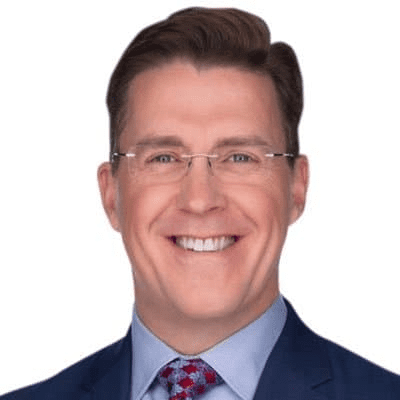 Mark Ockerbloom is an Emmy-Award-winning media personality serving as an anchor for Boston 25 News. He co-anchors Boston 25 News at 5:00, 6:00, 10:00, and 11:00. He’s been with WFXT since 2004. Previously, he anchored evening sportscasts and co-hosted a nightly sports show at NECN.

Ockerbloom is 61 years old as of 2023. However, his birthday is unknown.

Ockerbloom transferred to Boston College High School in his early high school years from Winchester. While there he played basketball and hockey. He then joined Providence College graduating in 1985 with a Bachelor of Arts degree in English.

Mark grew up in Winchester in a family of six children. His brother Peter is the Globe’s vice president of advertising. Their father, Richard, was a former president and chief operating officer for the newspaper.

Mark is married to his wife Marysia Sikora Ockerbloom. The couple lives in Medford with their three daughters Allison, Juliana, and Alena.

Ockerbloom is a native of Winchester, Massachusetts. Growing up in a newspaper family, Mark has always been intrigued by current events. He knows firsthand the type of trust viewers place in their newscasters, and the passion with which they follow local news. From sports to politics, his depth of knowledge about the Boston area adds keen insight to many of the stories he covers.

Major stories Ockerbloom has covered over the years include the Boston Marathon Bombings, Whitey Bulger’s capture, the Aaron Hernandez trial, the Pope’s visit to America, and the funeral for former President George H. W. Bush. He’s also covered several Patriots’ Super Bowls and Red Sox World Series as well as all of the victory parades that followed.

Before coming to WFXT, Ockerbloom anchored evening sportscasts and co-hosted a nightly sports show at NECN. Prior to returning home to New England, Ockerbloom worked at KOCO-TV in Oklahoma City where he was named Oklahoma’s Sportscaster of the Year. Ockerbloom got his start as a TV sportscaster at WMUR-TV in Manchester, New Hampshire. He has received broadcasting awards from the Associated Press and The Society of Professional Journalists. In 2010, Ockerbloom received a Boston/New England Emmy for Best News Anchor. In 2017 he took home another Emmy for his role in the station’s coverage of the State Police Overtime Scandal and in 2019 he captured a third Emmy for the station’s coverage of the Merrimack Valley Explosions.

Ockerbloom is an active supporter of JDRF, NAMI, Special Olympics Massachusetts, and Medfield Public Schools. He also volunteers at the Pan Mass Challenge in honor of his older brother Carl, who lost his battle with cancer in 2004.

Ockerbloom enjoys playing hockey, softball, fishing, and golf. An avid runner, Ockerbloom ran the 2002 Boston Marathon with his brother Carl, a memory he cherishes to this day.