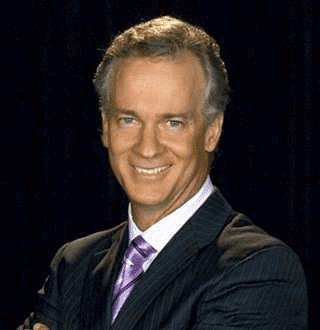 Trace Gallagher (Tracy G. Gallagher) is a media personality serving as a chief breaking news correspondent for Fox News Channel based in Los Angeles. Previously, he was a co-anchor of Fox News Channel’s The Live Desk, alongside Martha MacCallum.

He is an American National.

He is keeping a low profile on his parents. It is also not known whether he has siblings or not.

He is married to his lovely wife, Tracy Holmes Gallagher. In May 2021, he celebrated his wife’s birthday with a tweet, ‘My bride, best friend, and the all-around amazing woman turn?? Today. Still looks 29. Happy birthday and all my love Mama.’

He has two daughters, Lila and Evy Gallagher.

Gallagher serves as FOX News Channel’s (FNC) chief breaking news correspondent. He joined the network in 1996 as a correspondent and is based in Los Angeles. In this capacity, he has covered some of the biggest breaking news stories to hit the nation and throughout the world. Most recently, he led the network’s reporting on the college admissions scandal revealed by Operation Varsity Blues as well as contributed coverage surrounding the murder of journalist Jamal Khashoggi.

In the past, his reporting included the shooting on Capitol Hill, the Washington Navy Yard shooting, the sexual harassment charges against former San Diego Mayor Bob Filner, the George Zimmerman murder trial, and the birth of the Duke and Duchess of Cambridge’s first child His Royal Highness Prince George of Cambridge. Additionally, he provided breaking news coverage of the deadly crash of Asiana flight 214 at San Francisco Airport (SFO), the Boston Marathon bombing, and the shootings at Newtown Elementary School and at a movie theatre in Aurora, CO in 2012.

During his tenure at FNC, Gallagher has covered a multitude of stories, including the ongoing conflict in the Middle East, the tsunami in Tōhoku, Japan, and the death of Michael Jackson. He also spent five years in New York serving as co-anchor of FNC’s The Live Desk, alongside Martha MacCallum.

Sandra Smith of Fox News was caught on a hot mic expressing disbelief that a guest (Cleta Mitchell) was casting doubt on the network’s projection of a Joe Biden victory and that the show’s host, Gallagher, wasn’t pushing back. The clip came from a leaked raw feed of 2020’s election coverage. In the clip, Smith was seen furrowing her eyebrows and making a face when the guest, conservative attorney Cleta Mitchell, said, “Just because CNN says or even Fox News says that someone is president, doesn’t make them president.”

Sandra Smith, off-air, reacts to her colleague Trace Gallagher indulging a nutjob who denies the outcome of the election even after Fox News had called it for Joe Biden: pic.twitter.com/gZ4nrnVHab

Gallagher is in good health. As of 2021, he hasn’t been reported to be ill.

He has an estimated net worth of $2 million.