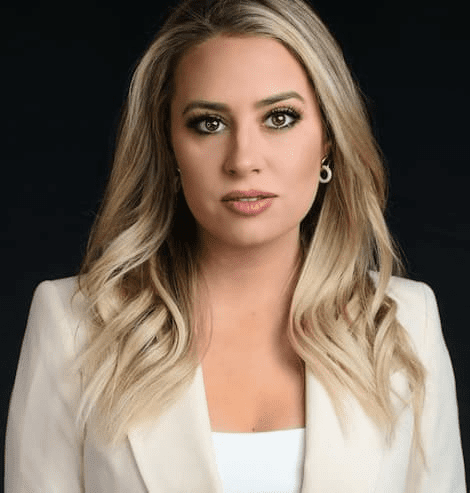 Jacqui Heinrich is a three times Emmy Award-winning reporter serving as a Congressional correspondent for FOX News Channel and a co-host for FOX News Audio’s The FOX News Rundown podcast. She joined the network in September 2018 as a general assignment reporter based in New York. Previously, she was an anchor at Boston 25 News.

Heinrich is an American national.

She graduated in Political Science from Duke University in 2006. While there, she completed TIPS Education Selective Summer Studies Program earning the highest marks in coursework. She also earned degrees in International Affairs, Religion, and Anthropology from George Washington University in 2001.

Heinrich is the daughter of Robert “Bob” Heinrich and Jane Greenwood-Fiaschetti. Her father, Robert has a house at Lake Winnipesaukee. Jacqui appeared on Fox and Friends with her mother, Jane to share the family’s chili recipe. There are speculations that her parents divorced and her mother remarried.

She has a brother, Maxwell Heinrich working in Texas.

The parents meet the parents! Franklins mom and dad are visiting New England for the first time ever and we’re taking them for the full tour. First stop, Dad’s house at Lake Winnipesaukee! ???

She is not married. However, she is in a relationship with Franklin Sahlhoff, a musician. The two lovebirds started dating in September 2015 and they live in Cambridge with their tuxedo cat, Pishi. On September 25, 2018, Jacqui and Franklin attended Golden Citizens Awards together.

Heinrich does not have kids yet though she is a Godmother to a little boy.

Heinrich serves as a congressional correspondent for FOX News Channel (FNC). She is also a co-host for FOX News Audio’s The FOX News Rundown podcast. She joined the network in September 2018 as a general assignment reporter based in New York. Jacqui reported on the campaign trail for the 2020 presidential election, where she provided on-the-ground coverage of both the Democratic and Republican National Conventions.

Heinrich is a three-time Emmy-award-winning reporter and was named the 2017 General Assignment Reporter of the Year for the National Academy of Television Arts & Sciences, Boston/New England chapter. As an anchor for Boston 25 News, she covered multiple breaking news events including the October 2017 deadly mass shooting in Las Vegas, the deadly trench collapse in the South End of Boston, and the trial of Erich Nowsch.

Prior to joining Boston 25 News, she spent nearly three years as a reporter and weekend evening anchor for KTNV-TV, the ABC affiliate in Las Vegas. She also worked as a one-man-band reporter for the NBC affiliate in Colorado Springs, where she also anchored KOAA’s weekend morning edition of the Happening Now Desk. In addition, she worked as an intern for the United States Congress, MSNBC, and WRC-TV, the local NBC affiliate.