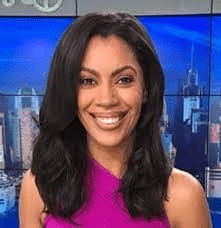 Allicot is a graduate of Hofstra University in Hempstead, Long Island, where she graduated with a Bachelor of Arts degree in Broadcast Journalism.

She is from Ozone Park, Queens, and most of her family still call the borough home. At the age of three, her parents moved to Ozone Park, Queens, New York where she grew up. Both of her parents worked for the NYC Transit authority. Her father died in 2010 of a full-blown stroke. She has six brothers however their identities are under review.

Allicot is happily married to his loving husband Jesse Gilmer who is African-American. He was born in America and he is the founder of JEG Sports & Entertainment based in New York. The duo tied the knot in 2015 and they are blessed with two kids: Shayla and Gigi.

Gigi was born at 1:00 am on July 13 weighing in at 7 pounds 5 ounces. She was born only one minute apart from Eyewitness News Reporter Kristine Thorne’s daughter, Vivienne.

Shirleen is the co-anchor of Eyewitness News This Morning and Eyewitness News at Noon. Before coming to WABC, she was the co-anchor of Action News at 4 on WPVI and Action News at 10 on WPHL in Philadelphia. She has covered everything from Hurricane Sandy to the Boston Marathon Bombings to the deadly 2015 Amtrak derailment. Some of her memorable moments include interviewing First Lady Michelle Obama in the White House Kennedy Garden and doing live reports from London during the Royal Wedding of 2018.

She previously worked at News 12 Connecticut, News 12 Long Island, and News 12 the Bronx. The Bronx is where she honed her skills in shooting, writing, and editing all of her stories on her own.

In her spare time, she enjoys volunteering, testing her skills in the kitchen, and spending time with her husband and two daughters.