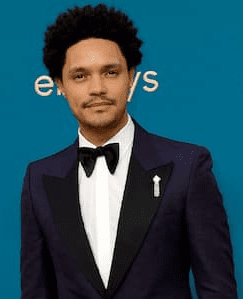 Trevor Noah is a South African comedian. He is also the host of the Emmy and Peabody Award-winning The Daily Show on Comedy Central.

He is South African by nationality.

Noah went to Maryvale College, a private Roman Catholic primary and high school in Johannesburg. However, he was expelled from the Catholic school for bringing a knife for protection against bullies.

His education would have to continue elsewhere. After sixth grade, Noah changed schools, attending a government school instead. He was required to take an aptitude test and scored well enough to be placed in the advanced class. On his first day, Noah saw that all but four of the thirty kids in his class, including him, were white. This fact, in itself, was not particularly significant. But when it was time for recess, he understood how race worked in his new school.

Noah started eighth grade at Sandringham High School, a school mixed with different races and run like a charter school in America. The school was large and represented every race of South Africa, serving as a model of how the country at large could or should be. Again, Noah’s education was a singular one in South Africa.

Trevor is the son of Robert Noah, a German-Swiss immigrant who lived in South Africa while he pursued various business ventures, and Patricia Nombuyiselo Noah, a Xhosa. The pair met when their paths crossed in an apartment building they both stayed in Johannesburg.

Noah has two half brothers: Andrew and Isaac Shingange. Her mother Patricia remarried Ngisaveni Abel Shingange in 1992. However, the marriage lasted for only four years due to physical and emotional abuse from Abel.

Noah had been in an on-and-off relationship with actress, Minka Kelly, since 2020. Kelly is the daughter of Aerosmith guitarist Rick Dufay and exotic dancer Maureen Kelly. She is also the granddaughter of actor Richard Ney.

Noah and Kelly have officially called it quits. The duo began dating in August 2020 but parted ways briefly in May 2021 after less than a year of dating. At the time, a source confirmed the split, stating that “their work commitments and careers are very different and they both felt like they should take time apart.”

In September of 2022, Noah was spotted out with musician Dua Lipa.

Noah, The Daily Show host has announced he will step away from the anchor desk.

In a video statement shared on Twitter Thursday, 29 September 2022, Noah said that after seven years as host of the Comedy Central satirical news program, his “time is up.”

“It’s been absolutely amazing. It’s something that I never expected,” Noah said of his experience hosting the show. “I found myself thinking throughout the time of everything we’ve gone through. The Trump presidency, the pandemic, just the journey, more pandemic and I realize that after the seven years, my time is up.”

Noah, a standup comedian from South Africa, was a relative newcomer to American audiences when he was named as host of “The Daily Show” after Jon Stewart

Advertisement
signed off in 2015.

“I want to say thank you to you, to you who watched this,” Noah said. “I never dreamed that I would be here and I sort of feel like ‘Charlie and the Chocolate Factory.’ I came here for a tour of what the previous show was and then the next thing you know I was handed the keys.”

Noah hinted that his decision to leave the show is rooted in his desire to return to more standup work.

“I spent two years in my apartment, not on the road, and when I got back out there, I realized there’s another part of my life out there that I want to carry on exploring. I miss learning other languages and I miss going to other countries and putting on shows,” Noah said.

He expressed his gratitude to his viewers, “The Daily Show” team, and to Comedy Central, “who believed in this random comedian nobody knew on this side of the world.”

He did not share when his final show would be but said he’d still be around for a while.

Noah is the most successful comedian in Africa. On February 21, Noah debuted his 9th new comedy special Afraid of the Dark on Netflix. The special was shot before a packed house in New York City at the Beacon Theatre on November 5, 2016.

Last year, Noah debuted his one-hour stand-up special, Trevor Noah: Lost in Translation, on Comedy Central. Noah was the subject of David Paul Meyer’s award-winning documentary film You Laugh But It’s True which tells the story of his remarkable career in post-apartheid South Africa. His Showtime comedy special, Trevor Noah: African American premiered in 2013. He was also nominated for “Personality of the Year” at the 2014 and 2015 MTV Africa Music Awards and won the award in 2015. His success has also spanned sold-out shows over 5 continents.

Born in South Africa to a black South African mother and a white European father, Noah has hosted numerous television shows including South Africa’s music, television, and film awards, and two seasons of his own late-night talk show, Tonight with Trevor Noah.

In November 2016, Trevor released his first book Born a Crime: Stories from a South African Childhood, which was an instant New York Times bestseller. Additionally, his performance on the Born a Crime audiobook was Audible’s highest-rated audiobook of 2016 and has remained one of the top-selling titles on Audible since its release. It was also nominated for two NAACP Image Awards, one for Outstanding Literary Work by a Debut Author and another for Outstanding Literary Work in the Biography/Auto-Biography category.

The book is a collection of personal stories about growing up in South Africa during the last gasps of apartheid and the tumultuous days of freedom that came with its demise. Already known for his incisive social and political commentary, here Trevor turns his focus inward, giving readers an intimate look at the world that shaped him.

He has an estimated net worth of $100 million.