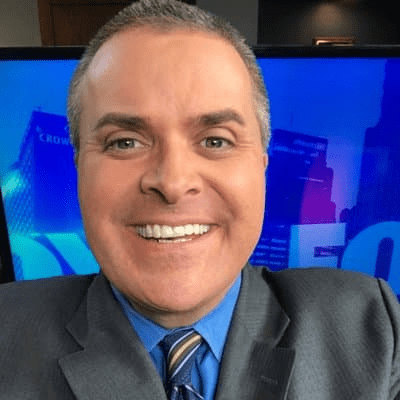 Sean McDowell is a media personality serving as a reporter at FOX 4 News in Kansas City. Previously, he was the primary sports anchor at a 24-hour cable news station in Orlando and Tampa, Florida.

He was born in the United States. However, his age is unknown.

McDowell graduated from Eastern Kentucky University with a Bachelor of Arts in Radio and Television in 1993. He also received a degree in Journalism from Marshall University in 1996. Additionally, McDowell was used as an extra in the feature film “We Are Marshall.”

He is a native of Ashland, Kentucky. However, there is no information about his family background, parents’ identities, and siblings.

Sean is married. He and his family live in Johnson County, where he’s often seen playing bad golf and tending to his beloved tomato plants. The couple has a 15-year-old son named Tommy aka Moose. They also have a tiny adopted cat from KC Pet Project named Pepper.

Sean wrote on his social media page: “My wife and I spotted this driveway #art during our 2-mile walk tonight.”

Sean is a reporter at FOX 4 News. He brings more than 20 years of television experience to the Fox 4 news team. He also has experience working in television news in Charleston, WV, and Lexington, KY. Sean was the primary sports anchor at a 24-hour cable news station in Orlando and Tampa, Florida, where he covered the NBA Finals, a Super Bowl, three Daytona 500s, and more. He was also managing editor/reporter at another Kansas City television station and was Emmy-nominated for sports reporting in 2001 while working in West Virginia.

Sean joined the FOX 4 Kansas City news team in May 2013. Since joining on, he’s covered memorable news stories such as the triple murder trial of Frazier Glenn Cross and various stories involving crimes across the metro. His sports background has come in handy, as he’s served as a reporter during the 2014 & 2015 World Series with the Kansas City Royals, NASCAR coverage at Kansas Speedway, and Friday night high school football teams.

Apart from his journalism career, Sean is a thankful member of the Church of the Resurrection in Leawood, KS, where he volunteers his time assisting with the church’s Technical Arts unit. He also serves as the vice-president of the Kansas City chapter of the University of Kentucky Association, and a caddy/golf parent with the local U.S. Kids Golf Tour.