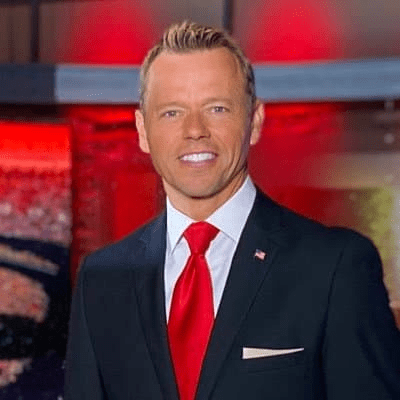 Rob Collins is an Emmy Winning Sports Director at FOX 4 News in Kansas City. Previously, he was a weekend anchor and reporter for FOX 4 News. Before that, he was a morning anchor at WCIA-TV.

He is in his forties. He was born on October 1st.

From 1988 to 1991, Rob attended Bowie High School. In 1993, he completed his Associate of Arts at North Central Texas College. Subsequently, in 1995 Rob graduated from East Texas State University with a Bachelor of Science degree.

Collins is married and together the couple has two children, a son, and a daughter. His wife is a painter.

Rob is an Emmy Winning Sports Director at FOX 4 News in Kansas City. He has kicked up the dust in several television markets over the past 25 years. Working in Texas, Illinois, and Kansas City, Rob has covered the Super Bowl, the Rose Bowl, the World Series, the NCAA Final Four, the Daytona 500, the Indianapolis 500, and countless other major sporting events. He has also logged reports from Sweden, Mexico City, Toronto, New York, L.A., Chicago, and hundreds of high school football fields in between.

Rob spends his free time in the gym, losing golf balls, or breaking up turf battles at home between the family dog and cat. He comes to Kansas City from Champaign, IL where he spent 10 years as a Sports Anchor/Reporter and 6 years as a Morning News Anchor.

Rob Collins Salary and Net Worth