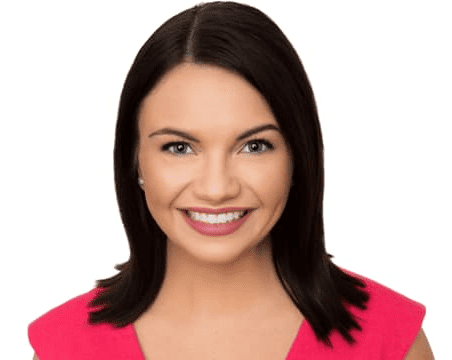 Meghan Moriarty is a media personality serving as a Weekend Morning Anchor and Reporter for Action News Jax. She joined the team in August 2019. Previously, she was a General Assignment Reporter and Fill-in Anchor at WVIR-TV/NBC29 in Charlottesville, Virginia.

She is around 27 years old as of 2022. However, her birthday is unknown

Moriarty attended Paul VI High School, Haddonfield, NJ from 2009 – 2013 for her high school diploma. She then joined the University of Maryland graduating from the Philip Merrill College of Journalism in May of 2017 with a Bachelor of Arts (B.A.) in Broadcast Journalism.

Moriarty was a part-time video editor for the CBS affiliate, WUSA*9, in Washington DC while studying at the University of Maryland. She edited for five nightly newscasts, assisted in producing, and trained in the microwave and live-shot operating.

Moriarty is a New Jersey native. However, there is no information about her parents. She hasn’t also revealed whether she has siblings or not.

Meghan has managed to keep her marital status away from the limelight. Therefore, it is not known whether she is married, single, or in a relationship.

Moriarty is a Weekend Morning Anchor and Reporter for Action News Jax. She joined the team in August 2019.

She’s covered notable stories during her time in Jacksonville, including Hurricane Dorian, the death of Ahmaud Arbery, impacts from the coronavirus pandemic and vaccine distribution, as well as exciting events — The PLAYERS Championship and Jaguars picking Trevor Lawrence with the No. 1 overall pick in the NFL Draft in 2021.

The New Jersey native previously worked for the NBC station in Charlottesville, Virginia. There, she was a general assignment reporter and fill-in anchor.

In Charlottesville, Moriarty covered several national stories, including the University of Virginia Men’s Basketball Championship and the 2017 Unite the Right Rally. She was also the first local TV reporter on the scene, where white supremacists, holding lit tiki torches, clashed with counter-protesters. She continued to cover the deadly rally the following day, along with the aftermath that followed.

Prior to reporting, Moriarty was a Multi-Media Journalist for the CBS affiliate, WUSA*9, in Washington D.C. She also spent time as a White House intern in 2015, assisting with the coordination of the press pool.

When she’s not on the job, you can find her at the beach or in the kickboxing studio, reading a good thriller, or planning her next culinary adventure!