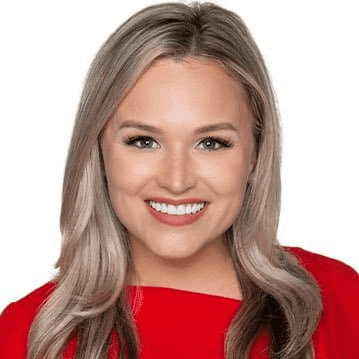 Chandler Morgan is an Emmy award-winning media personality serving as a weekday morning anchor for Action News Jax. She joined the team in December 2021. Previously, she was an anchor and reporter at WBTV in Charlotte, North Carolina.

Morgan graduated from the School of Journalism and New Media, at the University of Mississippi with a Bachelor of Arts degree in Broadcast Journalism with a minor in English and a specialization in Public Relations in 2016.

Morgan is a native of Georgia. However, she hasn’t revealed her parents to the public. She hasn’t also shared whether she has siblings or not.

Morgan isn’t married. She is engaged to her fiancé Matt Harris. The couple got engaged on June 20, 2021, in a surprise helped planned by one of her best friends.

She made the announcement across social media on Monday, June 21, 2021, saying, “I said YES this weekend to spending the rest of my life with the love of my life!”

It was a surprise in the works for months. Morgan says her fiancé told her that he would be going up to Concord to spend the afternoon with some friends to play golf. She was in Mooresville helping one of her best friends with an event that they would be putting on for their local business.

Morgan said, “I was helping [my best friend] with something at the event and had my back turned. When I turned around, Matt was there dressed in his handsome navy suit. I was completely stunned and shocked! He asked me if I would spend the rest of our lives together. My response? ‘Absolutely!’”

During the surprise, Matt shared stories of how he’d gotten Chandler’s dad’s blessing.

The engagement ring is custom-made and the setting is his parents’ previous setting that they used until their 25th anniversary. Matt’s parents have been married for 35 years. For her wedding band, the couple plans on using one of Chandler’s grandmother’s rings.

Morgan and her fiancé Matt Harris will tie the knot on Friday, March 3, 2023.

Chandler is an Emmy award-winning weekday morning anchor for Action News Jax. She joined the team in December 2021.

Previously, Chandler was an anchor and reporter in Charlotte, North Carolina. There, she won an Emmy and earned four Emmy nominations for her work. Some of her stories nominated include her coverage of the deadly mass shooting on the UNC Charlotte campus and local deputies who gave the ultimate sacrifice to protect the community.

Chandler has also won several Radio Television Digital News Association of the Carolinas awards, including TV News Reporter of the Year. Before working in Charlotte, Chandler was an anchor and reporter for the ABC/FOX station in Columbus, Georgia. Chandler also interned at Action News Jax’s sister station, WSB-TV, in Atlanta.

Here is a fun fact about Chandler; she is a Disney mega fan! If you have a Disney World fun fact, send it her way! She also enjoys sharing news updates on Disney and Space-related stories.

When she isn’t on the anchor desk, you can find Chandler at the beach looking for sea glass, enjoying the outdoors, or spending time with her fiancé and spunky dog, Kiki!