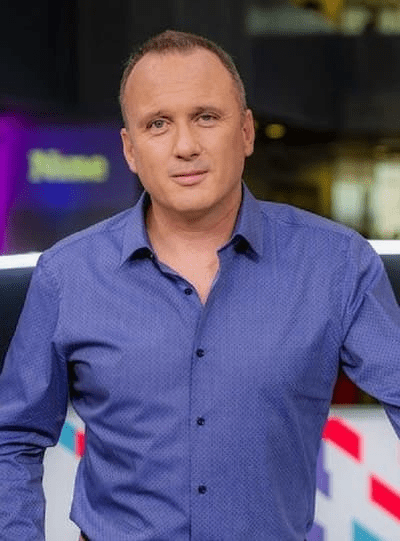 Martin Geissler is a media personality serving as a Television and Radio presenter on BBC Scotland. He presents the daily news programme The Nine on BBC Scotland. He joined the network in October 2018. Previously, he was a correspondent for ITN based in Scotland, Africa, and Europe.

Geissler was born in February 1971 in Edinburg.

Martin was adopted by Paul Geissler and Gretty Geissler when he was six weeks old.

“My parents were very smart about that,” he said. “I was adopted at six weeks old. It was always part of who I was. It was just my story.”

He is also the grandson of Alison Geissler. “My gran lived until 103 and was a proud Leither all her life. I have so many happy childhood memories of her and her house on Dudley Avenue. She passed away almost a decade ago and we all still miss her, but having a street named after her is an extraordinary honor, and in a way, it helps her live on.”

Geissler Drive, the new street near the Shore was named after Alison Geissler. She grew up in the area and was awarded an MBE for her services to glass engraving in 1991, and the Chairman’s Medal of the Edinburgh College of Art, at the age of 101.

Alison studied at the Edinburgh College of Art from 1925 until 1930 and continued her glass engraving career until the age of 94. One of her most notable pieces of work, a set of engraved goblets representing ten of the Queen’s Beasts, was presented to the Queen for her coronation in 1953.

Geissler is married to Teresa Geissler, a photographer. The couple is blessed with two children, Daisy, 21, and Douglas, 18, as of 2021.

Geissler joined BBC Scotland in October 2018 as a presenter. By February 2019, he was the co-anchor of the new BBC Scotland channel’s News service.

Previously, Martin worked as ITV News’ Scotland Correspondent. He joined ITN in April 2002 but was also involved with coverage of major international stories including the Second Gulf War, the Asian tsunami, and Hurricane Katrina in New Orleans. In May 2006 he became the Africa Correspondent. Reports from Zimbabwe were nominated for Emmy, BAFTA, and Royal Television Society awards. In August 2010 he became Europe Correspondent and in 2012 he became a UK-based correspondent.

He joined Scottish Television (now STV Central) in February 1994 as a reporter, sports presenter, and newsreader for Scotland Today. In 1998, he moved to Sky Sports as Scotland Correspondent, then rejoined Scotland Today eighteen months later.

Geissler began his career in 1991 at the Scottish bureau. Later he joined Grampian Television (now STV North) working on the nightly regional news programme North Tonight before moving to Tyne Tees Television as a reporter on Tyne Tees Today.

Martin Geissler Salary and Net Worth