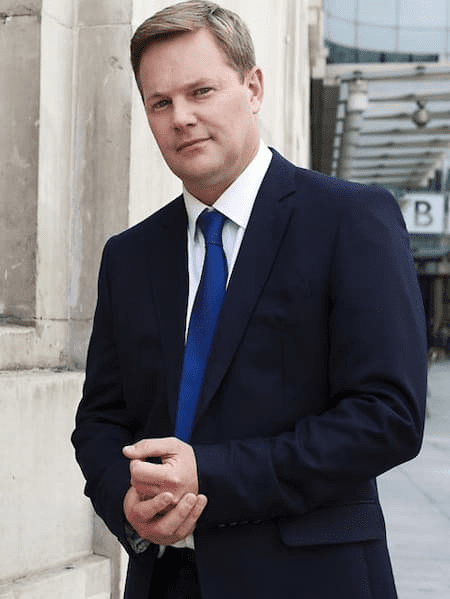 Christian Fraser is an award winning media personality working as the BBC’s Senior News Correspondent based in London. He is also the host of BBC News (formerly Beyond 100 Days) since June 2021. Previously, he was a foreign correspondent for the BBC based in Nairobi, Rome, Cairo, and Paris.

Fraser is a British citizen.

He graduated from Queen Elizabeth’s Grammar School, Blackburn. He also earned a degree in Spanish and Business Studies from Leeds Metropolitan University.

Born in Burnley, United Kingdom, Christian hasn’t shared much information about his childhood. His father was an editor while his mother worked in a coffee shop. However, his mother passed on when he was young due to a heart disease.

Fraser has not disclosed whether he has siblings or not.

The couple have two children together and they live in London.

Previously, Christian co-presented Beyond 100 Days (#Beyond100Days) with Katty Kay for the BBC News Channel, BBC World News, BBC Four and PBS. However, in June 2021 Katty Kay exited from the BBC. Since then, Christian is the presenter of the Show.

He began his career as a trainee reporter with the UK’s Mirror Group, later becoming a staff reporter with the Daily Mirror. His first day as an investigative reporter for Radio Five Live was 9/11. From 2002 to 2004, he spent a lot of time in Afghanistan and Iraq, several times embedding with British troops.

In 2005, Fraser was posted to Nairobi, where he reported on the conflicts in the Democratic Republic of Congo and southern Sudan. In mid-2006, he moved to Rome where he was the BBC’s correspondent for almost two years before moving to Cairo. He was the only British correspondent inside Gaza in 2008 during the Israeli offensive, known as Operation Cast Lead. He also spent a week in the Palestinian city of Rafah as the Israelis dismantled the tunnels.

In 2010 he was appointed the BBC’s correspondent in Paris. He covered the revolution in Egypt and also reported on the war in Libya – first from the rebel-held city of Benghazi and then from Tripoli. In 2014, he returned to London as the BBC News Channel’s Senior News correspondent. He also presents BBC Breakfast and Radio 4’s PM programme.

In 2005, Christian collected Gold at the Sony Radio Awards for BBC Radio 5 live’s rolling coverage of the Indian Ocean tsunami, which he presented through the night.

In 2006, he was nominated in the News Journalist of the Year category at the Sony Radio Awards.

At the Prix Bayeux in 2007, Christian was recognised in the international radio category for his reports on child casualties.

There is no intimate relationship between Fraser and Kay. Katty and Christian were co-presenters of BBC News (formerly titled Beyond 100 Days, 100 Days, and 100 Days+). It is a current affairs programme that aired on BBC World News since the inauguration of President Donald Trump until the departure of Kay from the BBC, in June 2021.

The programme focused on the current US Administration, global politics, Brexit and news from around the world with attempted punches of irreverent wit and fun. Kay presented live from Washington and Fraser live from London.
Fraser occasionally presented from Brussels (during European Council meetings) and also presented from the BBC Singapore Studio for a week during the 2018 North Korea–United States summit. Kay and Fraser presented from London and Windsor for a week in May 2018 during the wedding of Prince Harry and Meghan Markle.

The slot is now presented by Christian, following a similar format on the BBC News Channel and BBC World News.

His exact salary is undisclosed.

He has an estimated net worth of $1.5 million.