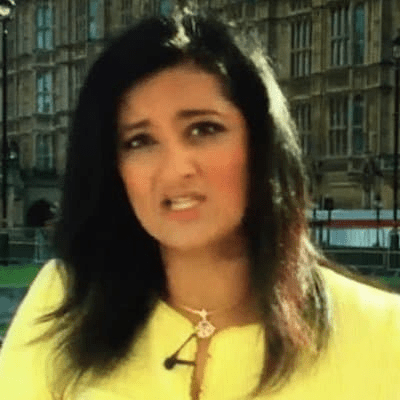 She was born in February 1968 in Liverpool, United Kingdom.

Guru-Murthy is a British by nationality.

Growing up Geeta was involved with orchestras, theatres and choirs. Later on she studied Biochemistry before finally changing careers.

Guru-Murthy was born in Liverpool however she grew up in West Bradford, Lancashire. Her family lived in a small village in Lancashire in which they were the only immigrant family and the only non-white family.

Her father was a radiologist in the local hospitals at Burnley and Blackburn. However, at the University he was a student politician.

Geeta’s family seems to be built around medicine and the NHS: her dad, her parents’ friends and her mother’s father were all doctors. The journalist has two brothers, a younger brother, Krishnan Guru-Murthy, a journalist and broadcaster for Channel 4 News and Ravi Guru-Murthy, the Chief Innovation Officer of the International Rescue Committee. Krishnan is married to Lisa Guru-Murthy and they have a daughter named Jasmine Guru-Murthy.

She is married to Philip Collins. The couple exchanged their wedding vows in June 2002 followed by a honeymoon in India.

Philip is a journalist, banker and a speechwriter. In September 2020, he joined the New Statesman as a columnist and contributing writer. He is also a visiting professor at the London School of Economics and an associate editor of Prospect magazine.

Previously, Philip worked as an equity strategist in an investment banking. He was also a political advisor to Frank Field, an educationist for the Institute of Education at the University of London and a BBC journalist hosting the London Weekend Television. Additionally, he was Tony Blair’s chief speechwriter as well as the lead writer and columnist for The Times.

The couple have two children.

Guru-Murthy was a reporter for the BBC’s regional news programme, BBC Look North (Yorkshire and North Midlands), before moving to 5 News.

In January 1998, Geeta covered the breaking of the Clinton–Lewinsky scandal from Champaign, Illinois for 5 News. By 2002, she was hosting Asia Today, with regular work for BBC World, BBC News 24, and BBC Breakfast and by 2005 presenting the news on BBC Radio 4. In 2002, Guru-Murthy appeared in the television series Waking the Dead.

In 2017, she was one of several female BBC employees campaigning against the gender pay gap.