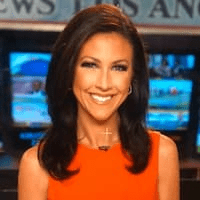 Gonzalez is tall in stature but her height is undisclosed.

Gonzalez grew up in Port Orange, Florida, and attended Atlantic High School. She went on to graduate from the University of Central Florida in 2005 where she graduated with a B.A. in political science and journalism.

She is a beloved daughter to Francisco Gonzalez and Cathi. Her father immigrated to the United States from Montevideo, Uruguay when he was a teenager. Marci has a younger sister, Christina Isabelle (born March 6, 1985), and a younger brother, Richard Frances (born September 20, 1992).

Gonzalez is happily married to her husband Jory Rand who is also a news anchor /reporter on ABC News. The duo began dating in 2018  two years before their first child. She was also in a relationship with fellow journalist, Will Carr who is currently dating Brianna Ruffalo

She lives in Northeast Los Angeles with her husband and son.

She is a mother to one boy called Brooks Henry Rand who was born On May 28, 2020

Gonzalez joined the CBS LA/KCAL team as a morning anchor in June of 2022.

Previously, she was a freelance correspondent for CBS News, following the 8 years she spent as a correspondent for ABC News. In that role, she traveled extensively, covering some of the biggest stories in the world including the deaths of Fidel Castro and Nelson Mandela, the Paris terror attacks, the 2013 Papal conclave at the Vatican, and the eruption of the Kilauea volcano in Hawaii. She was also a fill-in anchor for World News Now and America This Morning.

Prior to that, Gonzalez worked as a reporter and fill-in anchor at WABC in New York City and spent a memorable 4.5 years as an anchor/reporter at WPTV in West Palm Beach, FL. She started her career at News 12 The Bronx in New York where she was a “one-man-band” reporter and weekend anchor.