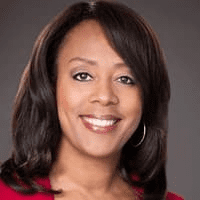 Amy Johnson is a media personality serving as a reporter on KCBS/KCAL. She joined the KCBS/KCAL team in November 2005. Previously, she was a News anchor, and reporter at 7 NEWS, WHDH-TV where she served from September 2000 to April 2005.

Despite being a media personality, she has managed to keep her personal life secret. Therefore, she has not disclosed information on when he was born. Therefore, her age is unknown

She went to California Baptist University in Riverside on a four-year volleyball scholarship. Where she earned a Bachelor’s degree in English/ Honorary Doctorate. Nevertheless, she also went to San Bernardino Valley College where she earned an Associate of Arts in Broadcast Journalism.

Johnson was born and raised in San Diego’s North County in Poway however, she has not disclosed information concerning her parents’ and siblings’ identities.

She is a married woman. Although she has not shared the name of her husband who is a military pilot. Together with her husband, they have been blessed with two sons.

Amy lives in Ventura County with her husband and children.

Amy grew up in San Diego’s North County in Poway and knew from an early age that she wanted to be a television news reporter. After graduating from California Baptist University in Riverside on a four-year volleyball scholarship, Amy began her news career at the CBS affiliate in Coos Bay, Oregon, as an anchor/reporter.

Her career path took her to Columbia, South Carolina, Milwaukee, Wisconsin, and Boston before leading her back home to Southern California where she joined the KCBS/KCAL team in 2005. Amy helped launch the stations’ Ventura County bureau in April 2006.

An advocate of reading, Amy was named Volunteer of the Year for the Milwaukee Boys and Girls Club for her work in an after-school reading program. She has also worked with at-risk youth as a mentor.