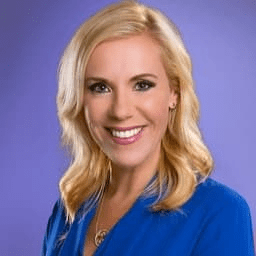 Kristine Lazar is a media personality serving as an Emmy award-winning investigative reporter for CBS 2 and KCAL 9 News. Previously, she was a Reporter at XETV FOX 6.

She was born in the United States. However, she keeps her personal life secret. Therefore, it is not known by the public her exact date and year of birth.

Kristine graduated Phi Beta Kappa from UC Berkeley, after growing up by the beach in San Diego. Additionally, she graduated from the University of California, Berkeley in 2000 with a bachelor’s degree in Mass communication.

She was born and raised in San Diego by her parents. However, she has not revealed information concerning her parents’ and siblings’ identities.

Lazar is married to her husband Mike Hatton. The couple tied the knot in 2008. Mike is an American actor and producer. The duo has been blessed with three children, a boy, and twin girls. Surprisingly, her husband is a twin too. so you can say she has become a bit of an expert when it comes to living with multiples.

Kristine is an Emmy award-winning investigative reporter for CBS 2 and KCAL 9 News.

She has worked all over California, from Palm Springs and Fresno, back down to San Diego before landing here in Los Angeles in 2007. In 2017, she helped launch our consumer justice franchise, 2 On Your Side.

Her reporting on the fatal 2008 Metrolink accident led to the passage of federal legislation limiting cell phone use by conductors and engineers on trains.

Kristine won an Emmy in 2007 for a piece she did on child prostitution and another Emmy in 2014 for a feature on a middle-aged woman with Down syndrome, who finally received surgery that enabled her to dance.

When she isn’t at work, she enjoys spending all day in the backyard with her kids or visiting the beaches in her hometown. She also loves to bake- but only foods with lots of sugar and butter!