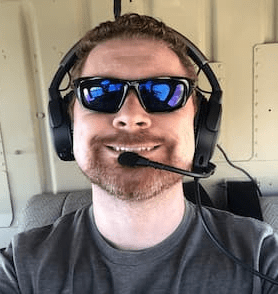 Desmond Shaw is a media personality serving as a reporter for CBS LA, KCAL 9, and CBS 2. He is also Los Angeles’ Eye in the Sky news reporter and cameraman. Previously, he worked for KNX1070.

Shaw is American by nationality.

There is no information about his educational background. However, he must be highly educated considering his career achievements.

Shaw hasn’t disclosed any information about his family background, parents’ identities, and siblings. Therefore, it is not clear whether he has siblings or not.

Despite being a media personality Desmond has managed to keep his marital status away from the limelight. Therefore, it is not known whether he is married, single, or in a relationship.

Shaw is Los Angeles’ Eye in the Sky news reporter and cameraman. He is also a reporter for CBS LA, KCAL 9, and CBS 2. An avid dog walker, city explorer, and retro gaymer, Shaw previously worked for KNX1070.

Airborne radio and TV traffic reporters have provided a much-needed resource during the wildfires plaguing Southern California. While some traffic navigation apps have actually been reportedly sending drivers toward the danger zones, a human eye-in-the-sky can report what Waze or Google Maps can’t “see.”

As the wildfires ravage Los Angeles, the New York Times says “traffic reporters have emerged as lifelines through the chaos, stars in an urban, multi-fire battle that could compete with a disaster film plot line from a Hollywood studio.”

As reliance on GPS systems and traffic phone apps has increased, radio traffic reports have sometimes taken a backseat. But as it has been in other natural disasters, the citizens of Los Angeles are relying on radio to keep them informed with up-to-the-minute changes on the location and direction of the wildfires.

“For people who are not familiar, they are kind of trusting [traffic apps] blindly,” KTLA-TV traffic anchor Ginger Chan told the Times. “You’re running into a situation that will change on a dime, and then it’s putting you in areas that could be danger zones.”

In addition to providing road closure information and commute time updates, traffic reporters have been acting as breaking news reporters during coverage of the massive wildfires, relaying information to listeners in real-time.

In 2017 during the Cali fires, the 60-mph winds grounded some aircraft, leaving Entercom news KNX (1070) Los Angeles traffic reporter Shaw feeling somewhat left out. “I definitely feel kind of hamstrung or helpless,” he said. “My city is burning and people are trying to get out of town and I wish I could be up above, helping people out.”