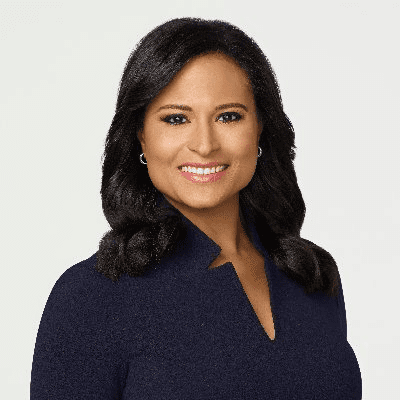 Kristen Welker is a media personality serving as NBC News White House correspondent and co-anchor of Weekend Today alongside Peter Alexander. She joined the network in 2010 and she is based in Washington D.C. She is also the second black woman to moderate a presidential debate alone.

She was born on July 1, 1976, in Philadelphia, Pennsylvania, United States.

Her parents are Harvey and Julie Welker. Her father, Harvey is a white consulting engineer based in Pennsylvania while her mother, Julie is African-American and a real estate agent. Julie once ran for the 5th City Council district in Philadelphia in 1995. She was also the president and CEO of Coldwell Banker Welker Real Estate. Kristen is an only child.

Welker married John Hughes on March 4, 2017, at Hyatt at the Bellevue Hotel in Philadelphia. John is the Marketing Director at Merck in Pittsburgh, Pennsylvania since 2015. He has been working with the company since 2006 and previously he was the Marketing Executive.

The couple first met in October 2014 after they were set up on a date by mutual friends. They had their first date just a block away from Bellevue Hotel in Philadelphia where they wedded. Her husband proposed to her in 2016 during the campaign trail when she was covering the election campaigns for NBC News.

Welker had previously told her husband that she would be in Washington D.C. for only 24 hours and he met her there, took her to the steps of Lincoln Memorial, and popped the question.

She is expecting her first child with her husband in June 2021 through a surrogate. In a tweet, she revealed that the baby is a girl.

After years of really tough infertility struggles, my husband, John, and I are so thrilled to share that, with the help of a surrogate, we will welcome a baby girl and become a family of three in June. pic.twitter.com/s2eqJ8QaK6

She penned a touching letter to her unborn daughter saying; “I cannot wait until the moment I hold you for the very first time — it is all I have dreamed about for years.”

Welker is an NBC News Chief White House Correspondent and Co-anchor of Weekend Today alongside Peter Alexander since January 2020. Her political reporting appears across all NBC News and MSNBC platforms, including “NBC Nightly News with Lester Holt,” “TODAY,” “Meet the Press,” and NBCNews.com. She joined the network in 2010. During NBC News’ 2016 election coverage, she reported from the trail of former Sec. Hillary Clinton’s campaign. She frequently broke exclusives like Vice President Joe Biden’s decision not to run for office and was recognized by Glamour magazine as a “key player” of the “women of Election 2016.”

Welker began covering the White House for NBC News in December 2011, traveling domestically and internationally with President Obama, the First Lady, and Biden. She was “a lead source on headline-grabbing moments from payroll tax cuts to FLOTUS’s first international solo trip to South Africa.”

Prior to the White House, she was a network correspondent based in Burbank, California. She also worked at WCAU-TV, NBC’s Philadelphia-owned and operated station, where she anchored the NBC 10 weekend newscasts and started as a general assignment reporter in April 2005. Previously she worked at WLNE-TV in Providence, Rhode Island, and KRCR-TV in Redding, California. She is a member of the National Association of Black Journalists.

She was nominated for a national Emmy Award for her role in NBC News’ midterm election coverage in 2010. In September 2020, she was honored with the award for Outstanding Journalist in Broadcast Television at the Washington Women in Journalism Awards.

On October 22, 2020, Welker was a moderator in the second presidential debate with Donald Trump and Joe Biden. She has been lauded online for her performance as moderator, in particular being praised for keeping candidates on time and not allowing them to talk over her.

There have been more than 125,000 tweets about Kristen, who became only the second black woman to moderate a presidential debate alone, 28 years after ABC News journalist Carole Simpson became the first in 1992.

Welker was 40 years when she got married in 2017. The couple immediately started to try to have a baby but it didn’t work immediately so they thought they should go to a doctor as a precaution. After a visit to the doctor, she was advised by her fertility specialist to try to conceive through IVF or in vitro fertilization because her uterus lining was too thin to carry a child. At first, she thought that the problem could be fixed.

“And I thought, ‘Okay, well, let’s fix it. There has to be something that we can do to fix this,'”

After an array of various tests and appointments over the time span of two years, Kristen then accepted that she would not be able to carry a child on her own. She did not give up on their dream of becoming parents and as a couple, they decided to go through surrogacy.

“Being matched with a surrogate is one of the most extraordinary experiences I have ever had,” she said.

The first transfer to the surrogate ended up being unsuccessful though the surrogate finally became pregnant and they are expecting their first child in June 2021.

“Our special helper and hero is a young mom who says being a helper is her purpose,” Welker continued in her touching piece. “… The moment that we found out was the happiest of our lives.”

Going through this process, I learned how difficult and isolating infertility struggles can be for hopeful parents. That’s why we opened up about our years-long journey to parenthood this morning on @TODAYshow.https://t.co/TbUtwGcIuw

Her estimated net worth is $3 million