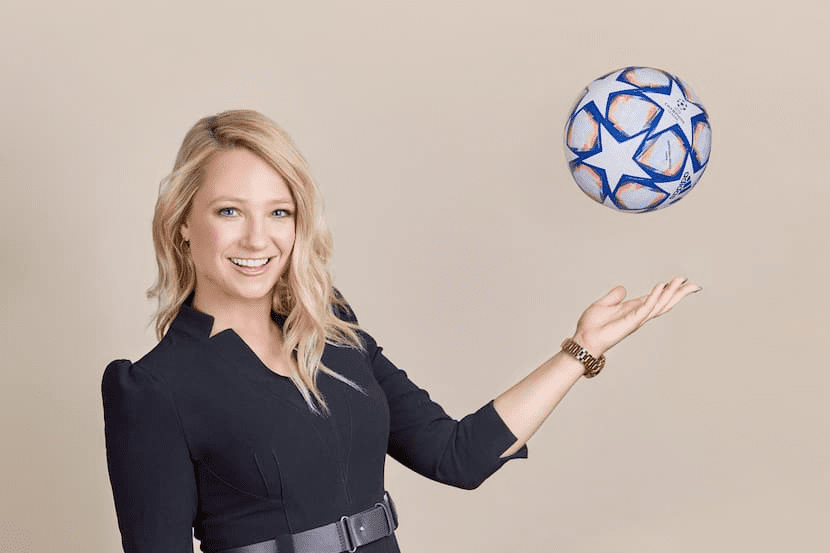 Katie Shanahan is a media personality serving as a Sports Broadcaster. Currently, she is leading the ITV Football coverage for the Women’s England squad and presenting on Sky Sports. She is also a BBC Sports Presenter. Previously, she was a reporter on Sky Sports, Soccer Saturday.

Shanahan is around 25 – 35 years old. However, her birthday is unknown.

Shanahan graduated from Loughborough University in 2014 with a Bachelor of Science in Geography. She also earned a Master’s degree in Sports Journalism from St Mary’s University, Twickenham in 2020.

Katie’s family are big football and rugby fans. She also has a brother. Growing up she’d always be in the back garden playing cricket with him.

Despite being a media personality, Katie has managed to keep her personal life away from the limelight. Therefore, it is not known whether she is married, single, or in a relationship.

Katie’s love of sports started at a young age. Having been introduced to hockey when she and a friend signed up for their local club, it quickly became something she was very passionate about, going on to represent England at multiple age levels.

“It completely took over my life and I absolutely loved it,” she said.

“I made loads of friends along the way, I was training 25 hours a week and traveling the world with England Hockey, which was just amazing! Sport has been a massive part of my life; my family are big football and rugby fans. I’d always be in the back garden playing cricket with my brother, and when there was any opportunity to play sport at school or university, I tried to do it,” she added.

With hockey being a big focus at both schools she went to Loughborough university where she later studied, it seemed only right that she continued to play the sport. At one point, she was playing for up to five teams per week, including her local teams, county, regional and national. She also gained an incredible experience when she was on a hockey scholarship at UNC in North Carolina. Followed by playing for the Rockingham Redbacks in Western Australia, where she found a way to travel the world, playing the sport she loved.

However, after suffering a head injury from a ball resulting in plastic surgery, concussion, and spinal repair, she decided to give up her playing career.

Katie is a dynamic broadcaster and journalist, currently leading the ITV Football coverage for the Women’s England squad and presenting on Sky Sports. Combining a wealth of experience at the elite level sport with her distinctive punchy style Katie delivers informative and entertaining live TV

Katie is also a former international athlete having played England Hockey for five years before moving into sports broadcasting. She won bronze at the European Championships, clinched the Premiership title in England, and has traveled around the world playing hockey at the highest level in the USA and Australia.

Presenting the sport on BBC Radio 5 Live led her to anchor programmes and bulletins on BBC One, BBC News Channel, and BBC World broadcasting to hundreds of millions of viewers. When the Tokyo Olympics were postponed in 2020, Katie broke the news to the nation in a calm, composed but authoritative manner. From global stories such as this to Manchester City’s UEFA ban and Deadline Day, it’s opened doors to covering live events such as Wimbledon and the Tokyo Olympics on the BBC Red Button in the summer of 2021.

Before that, Katie was reporting from the center court at Eastbourne tennis, presenting on Euro 2020 and the Champions League Final for BBC Sport News. Plus, bringing her insight, energy, and enthusiasm every weekend on BBC Radio 5 Live as the goals fly in across the country with previous stints at BBC Sport’s Final Score and BT Sport.

Katie Shanahan Salary and Net Worth