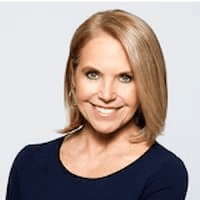 Katie Couric is the co-founder of Katie Couric Media. She is also an award-winning journalist, best-selling author, and documentary filmmaker of “Fed Up,” “Gender Revolution” and “America Inside Out”.

In 1975, Katie enrolled at her father’s alma mater, the University of Virginia, and was a Delta Delta Delta sorority sister. She served in several positions at UVA’s award-winning daily newspaper, The Cavalier Daily. During her fourth year at UVA, Katie was chosen to live as Senior Resident (SR) of The Lawn, the heart of Thomas Jefferson’s Academical Village. She graduated in 1979 with a Bachelor’s degree in English and a focus on American Studies.

Katie is the daughter of Elinor Tullie, a homemaker and part-time writer, and John Martin Couric, a public relations executive and news editor at The Atlanta Journal-Constitution and the United Press in Washington, D.C.

Her mother was Jewish and converted to Presbyterianism before the marriage while her father had French, English, Scottish, and German ancestry. She was diagnosed with mantle cell non-Hodgkin’s lymphoma, which was kept at bay for a decade. Her father on the other hand had prostate cancer, which was treated with radioactive seeds.

Her sister, Emily, wrote Divorce Lawyers: What Happens in America’s Courts after a tumultuous divorce, and later served as a Democratic state Senator in Virginia. She was considered the frontrunner as a candidate for lieutenant governor but instead died of pancreatic cancer in 2001. Emily’s son, Jeff Wadlow, is a rising Hollywood director whose best-known work is Cry Wolf, the 2005 high school horror movie with Jared Padalecki.

Katie is married to financier John Molner. The couple got engaged in September 2013 after two years together and were married in a small, private ceremony at her home in The Hamptons on 21 June 2014.

Prior to that, Katie was married to John (Jay) Paul Monahan, a lawyer. The couple tied the knot in 1989 and welcomed two children, Ellie, now 30, and 28-year-old Caroline before he sadly passed away from colorectal cancer in 1998 at the age of 42.

After losing her husband, Jay Monahan, to colon cancer in 1998, Katie became a public leader in the fight against the country’s second largest cancer killer. In March 2000, she launched the National Colorectal Cancer Research Alliance (NCCRA) with the Entertainment Industry Foundation (EIF) and cancer activist Lilly Tartikoff to fund cutting-edge research in colorectal cancer and generate awareness about the life-saving value of screening.

She is also a co-founder of Stand Up To Cancer (SU2C), an organization that has raised nearly $200 million in funds to accelerate research that can get new therapies to patients quickly. In May 2008, she and several other network news anchors participated in the first SU2C broadcast, an unprecedented effort that culminated in a one-hour, commercial-free, primetime program on ABC, CBS, and NBC in September 2008.

Couric is the co-founder of Katie Couric Media, award-winning journalist, best-selling author, and documentary filmmaker of “Fed Up,” “Gender Revolution” and “America Inside Out”.

KCM was founded in 2017 by Couric and her husband, John Molner, formerly a general partner at a New York-based investment firm.

Together, they identified a white space in the media landscape and set out to help brands amplify their values and cultivate an engaged and diverse audience through authentic storytelling.

Today, KCM collaborates with some of the world’s biggest brands to create elevated, purpose-driven content. Its core mission is to help businesses develop and deliver powerful narratives around the most critical and urgent issues of our time.

From diversity and inclusion to the environment and sustainability to misinformation and the media, KCM is able to unpack complicated stories and tell them in a way that enlightens and inspires. These narratives are showcased across KCM’s wide-ranging platforms, including a daily newsletter, a suite of podcasts in partnership with iHeartMedia, short and long-form video series, and social media.

Previously, Couric hosted The Today Show, CBS Evening News, and was a Special Correspondent for ABC News. She was also a Global Anchor for Yahoo News.

“I felt sick and the room started to spin,” Couric wrote. “I was in the middle of an open office, so I walked to a corner and spoke quietly, my mouth unable to keep up with the questions swirling in my head.”

Couric’s diagnosis brought back all the fresh memories of her loved ones who had had cancer before.

“The heart-stopping, suspended animation feeling I remember all too well came flooding back: Jay’s colon cancer diagnosis at 41 and the terrifying, gutting nine months that followed. My sister Emily’s pancreatic cancer, which would later kill her at 54, just as her political career was really taking off. My mother-in-law Carol’s ovarian cancer, which she was fighting as she buried her son, a year and nine months before she herself was laid to rest.”

Couric had surgery in July to remove a tumor from her breast that she wrote was “2.5 centimeters, roughly the size of an olive” and underwent radiation, which, she wrote, ended Tuesday.

She went public with her experience, she wrote, as a teachable moment she hopes will save lives.

“Please get your annual mammogram. I was six months late this time,” Couric wrote. “I shudder to think what might have happened if I had put it off longer. But just as importantly, please find out if you need additional screening.”