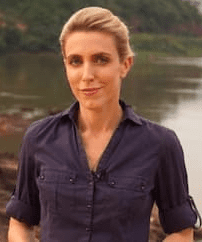 Clarissa Ward is a media personality serving as the chief international correspondent for CNN based in London. She is also the host of the limited series podcast from CNN Audio, Tug of War. Prior to joining CNN in 2015, Ward served as CBS News‘ foreign correspondent and contributed regularly to ‘60 Minutes.’

Ward is of American nationality.

Ward attended the Godstowe and Wycombe Abbey boarding schools in England. She also studied comparative literature at Yale University and graduated with distinction in 2002. In 2013, she received an Honorary Doctor of Letters degree from Middlebury College in Vermont.

Clarissa is the daughter of Rodney Ward (father) and Donna Ward (mother). Her father is British while her mother is American. She grew up in London and New York City.

Her father is also a former investment banker and ex-member of Cambridge University’s rowing team, while her mother is an exclusive interior designer. Their previous home on South Ocean Boulevard was awarded the Schuler Award from the Preservation Foundation of Palm Beach.

Clarissa is married to Philipp von Bernstorff, a fund manager and she lives in London. The couple first met at a 2007 dinner party in Moscow where Bernstorff told Clarissa, “I think war correspondents are egomaniacs.”

“Perhaps covering war does give you a slightly different perspective,” Clarissa says. “In the grand scheme of things to freak out about, this is not one of them.”

“On Monday, June 29th, 2020 at 929am Caspar Hugo Augustus Idris von Bernstorff was born and three became four,” she wrote on Instagram. “The most blissful blessing!”

Ward reflected on her first pregnancy in a 2020 piece for ELLE titled “Pregnant on the Front Lines.” In it, she admitted that she “had always viewed becoming a mother as perhaps the least extraordinary thing a woman could do,” which is why she “was determined to be different, to take pregnancy and childbirth in stride.”

While pregnant with her first child, Ward also traveled to the Caribbean to cover the aftermath of Hurricane Irma, as well as the border between Bangladesh and Myanmar, and Yemen. When she told her husband that she wanted to go to Yemen, where a war was going on, he reminded his wife, “This isn’t just about you anymore.”

Throughout her trip, Ward felt her “baby wasn’t kicking as much,” which gave her anxiety attacks. “Where are you, my love?” she whispered while laying in her sleeping bag. “Give me a kick so I know you’re okay.”

Ward revealed, “After some time, I felt a squirm inside of me, then a gentle kick. I wept with relief and ached with love for this mysterious creature whom I had never met. I suddenly fully understood what Philipp had meant. It wasn’t about me anymore. I was a vessel. And it was a privilege.”

Ward is CNN’s multi-award-winning chief international correspondent based in London. She has spent nearly two decades reporting from the front lines around the world from Syria, Iraq, Iran, Afghanistan, and Yemen to Ukraine and Georgia during the Russian incursion in 2008.

Named 2019 Reporter/Correspondent of the Year by the Gracies, she is the author of ‘On All Fronts: The Education of a Journalist‘ (Penguin Press), a memoir that details her singular career as a conflict reporter and how she has documented the violent remaking of the world from close range.

She is also the host of the limited series podcast from CNN Audio, Tug of War.

In 2022 Ward spent more than 10 weeks in Ukraine covering the ongoing Russian invasion. She reported live from a subway station in Kharkiv as residents scrambled to find shelter as Russia’s assault unfolded. She also witnessed residents fleeing Irpin across a destroyed bridge after several days of heavy bombardment.

Ward visited Chernihiv after Russian forces left the city, finding residents reeling from weeks of being cut off from the rest of Ukraine. While shadowing paramedics in Kharkiv, Ward and her team were forced to run for safety after getting caught in active Russian shelling.

In 2021, Ward reported from Afghanistan in the weeks leading up to the fall of Kabul in August 2021, staying in the country for several days after the Taliban took control of the capital city. She got exclusive access to an Afghan base in Kandahar days before it was taken by the Taliban and also interviewed the Taliban at a former US military base in Ghazni province after it had been seized.

Her extensive reporting from the streets of Kabul after the Taliban took control showed the chaos and fear that ensued, including chaotic scenes outside the city’s airport as Taliban fighters blocked access to people trying to flee the country. Days before Kabul fell Ward also interviewed a senior ISIS-K commander about the terrorist group’s plans in Afghanistan. After the interview, ISIS-K claimed responsibility for the deadly attack outside the Kabul airport.

Ward, senior field producer Brent Swails, and photojournalists William Bonnett and Scott McWhinnie recently were recognized with the 2021 George Polk Award for Foreign Television Reporting for their reporting on the fall of Afghanistan.

Nearly two months after the February 2021 military coup in Myanmar, Ward, and her team were the first foreign journalists permitted to enter the Southeast Asian nation. While there she reported on the widespread military crackdown and confronted Myanmar’s military junta about the violent suppression of protests taking place in the country.

And as India experienced a deadly second wave of coronavirus, Ward traveled across the country to cover the unfolding crisis. Reporting from an understaffed Covid-19 ward in Uttar Pradesh and overwhelmed crematoriums in Delhi and the holy city of Varanasi, Ward was one of three CNN correspondents in India covering the rampant spread of the deadly virus.

In late 2020 Ward investigated the poisoning of Russian opposition leader Alexey Navalny, uncovering new evidence identifying the Russian security services who trailed Navalny for more than 30 trips over the course of three years. As part of this joint investigation with Bellingcat, Ward interviewed Navalny at an undisclosed location in Germany — even showing him photographs of the agents that tracked him — and confronted a suspected member of the elite toxins team at his home outside Moscow. Ward and CNN were recognized with two 2021 Emmy Awards for their investigation with Bellingcat.

Ward also investigated Russian trolls operating in the West African nations of Ghana and Nigeria to stoke racial tensions and stir up social unrest in the US. For this months-long investigation, she traveled to one of the operation’s headquarters in Ghana, where she interviewed one of the trolls and tracked down the person running the operation, a Ghanaian who lives in Russia. This report on ‘Russia’s Secret Influence Campaigns’ was named a finalist of the 2021 Alfred I. DuPont-Columbia University Award.

She has also contributed to CNN’s breaking news coverage of the Russia-Ukraine tensions; the Covid-19 pandemic; the crisis between the US and Iran in early 2020, tracking the story from the US, Iraq — including the site of an Iranian missile attack — and Ukraine with every major development. When Turkey launched a military operation targeting America’s Kurdish partners in northern Syria in 2019, Ward was on the ground in Syria covering the chaos of civilians fleeing their homes amid military strikes. Her reporting on the Turkish incursion helped earn the network a 2020 Emmy Award in the Outstanding Breaking News Coverage category.

In 2019 Ward investigated Russia’s use of mercenaries in a two-part series for CNN, ‘Putin’s Private Army.’ For this months-long, Emmy Award-winning investigation, Ward secured the first on-camera interview with a former fighter for Wagner — Russia’s most notorious private military contractor. She traveled to the Central African Republic, to look at growing Russian mercenary activity on the continent. After visiting a diamond mine with ties to a Russian oligarch, Ward and her team were followed and intimidated by a car full of Russians. After their reports came out, they were targeted by a Russian media propaganda campaign trying to discredit their reporting.

This followed Ward gaining unprecedented access to Taliban-controlled territory in Afghanistan for an exclusive report, ’36 Hours with the Taliban.’ Ward and CNN field producer Salma Abdelaziz spent time at a local madrasa, where dozens of children — boys and girls — pored over their Qurans and a Taliban-run clinic in the village of Pashma Qala.

In 2018 she reported extensively on the murder of Washington Post columnist Jamal Khashoggi, even obtaining exclusive footage that showed a Saudi operative posing as Khashoggi in an attempt to cover up the killing. That report on Khashoggi’s body double was recognized with a Golden Nymph from the Monte Carlo Television Festival in 2019 and CNN’s overall coverage of Khashoggi’s murder was recognized with a prestigious 2020 Alfred I. DuPont-Columbia Award.

In early 2016 Ward traveled undercover to rebel-held areas in Syria — where almost no Western journalists had visited in over a year — to report on what life was like there under the Russian and regime bombardment. Less than 24 hours after arriving, Ward witnessed an airstrike on a fruit market that left 11 dead. The entire ‘Undercover in Syria’ series of exclusive, award-winning reports from behind rebel lines can be found here. To date, ‘Undercover in Syria’ has been recognized with a Peabody Award, an Edward R. Murrow Award for ‘News Series’ and the Overseas Press Club’s David Kaplan Award.

As one of the last Western reporters to visit rebel-held Aleppo, Ward was asked to address a UN Security Council meeting on the embattled Syrian city in August 2016, stating “there are no winners in Aleppo.”

Ward joined CNN in 2015 from CBS News, where she served as a foreign correspondent for four years and contributed regularly to ’60 Minutes.’

On an undercover assignment to Syria in 2014, she interviewed two Western fighters about why they joined the jihad there. One of the jihadists was a young Somali-American from the Midwest, making Ward the only Western journalist to have interviewed an American jihadist fighter inside Syria since the start of the civil war.

While at CBS Ward interviewed world leaders like U.S. Secretary of State Hillary Clinton in 2012 and Russian Foreign Minister Sergei Lavrov in 2013, challenging them both on Syrian President Bashar al-Assad’s brutal crackdown inside Syria.

Before joining CBS Ward spent two years in Moscow and two years in Beijing for ABC News. She covered the 2011 earthquake and tsunami in Japan and the 2008 global food crisis, where her coverage received an Emmy Award for Business and Financial Reporting.

Prior to ABC News, Ward was based in the Middle East for Fox News Channel, covering the execution of Saddam Hussein and other key stories in the region in addition to interviewing notable figures like General David Petraeus and Lebanese President Emile Lahoud.

Ward’s career in journalism started in 2002 as an intern at CNN’s Moscow bureau. She has since been based in Baghdad, Beijing, Beirut, Moscow, New York, and London.

In 2016 she received the prestigious Excellence in International Reporting Award from the International Center for Journalists (ICFJ) for her outstanding war reporting in hotspots like Iraq and Syria.

In 2022, she also collected the Ted Sorensen Award from Network 20/20 in recognition for “adeptly crafting the first draft of history and providing original insight into the people and events of our time.”

How Many Languages Does Clarissa Ward Speak?

What did Clarissa Ward study?

Ward studied comparative literature at Yale University where she graduated with distinction in 2002.