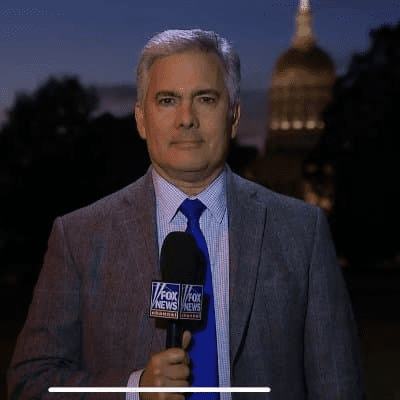 Jonathan Serrie is a media personality serving as an Atlanta-based correspondent for Fox News Channel since April 2009. He joined the network in 1999 and he is covering Southern politics, CDC and COVID-19. Previously, he was a reporter based in Los Angeles and Seattle bureaus.

Born in 1965 in Beloit, Wisconsin, United States, Jonathan is around 56 years old.

A 1987 graduate of Emory University, Jonathan received a Bachelor of Arts degrees in Political Science and English. At the University, he was an Editor in Chief of The Emory Wheel.

The Beloit native is the son of Hendrick Serrie. His father, Hendrick was an anthropologist. He was also a lecturer at Beloit College. However, Jonathan has not shared any information about his mother with the public. It is also not known whether he has siblings or not.

Serrie is married, however he is keeping a low profile on his wife. He has not revealed his wife to the public, therefore she is unknown.

Some sources report that he has a son, however it is not clear since Jonathan is keeping his family out of the limelight.

Serrie is a Fox News correspondent based in the Atlanta bureau. He joined the network in April 2009.

During his tenure at the network, he has reported live on several major international and national news stories, including the coronavirus pandemic, major political elections and devastating hurricanes and tornadoes across the United States, among other stories. Recently, he provided the latest breaking election news from Georgia during FNC’s Democracy 2020 election coverage.

Previously, Serrie reported live from Sanford, Florida to cover the George Zimmerman murder trial and shooting of 17-year old Trayvon Martin. Additionally, he provided live coverage of the 2012 campaign finance fraud trial of former Senator John Edwards in Greensboro, NC, Hurricane Isaac from New Orleans in 2012, the 2010 Deepwater Horizon oil spill in the Gulf Coast and the aftermath of Hurricane Katrina in Mobile, AL and the Mississippi River flooding in Memphis, TN in 2005.

Serrie also served as an embedded journalist with the U.S. Marines in the wake of the devastating 2010 earthquake in Haiti and reported from Skopje, Macedonia and Kacanic, Kosovo during Operation Allied Force, while he was stationed in Qarshi, Uzbekistan. He has traveled twice to Afghanistan, reporting on the battle at Qala-i-Jangi in Mazar-i-Sharif and on the establishment of the post-Taliban government in Kabul.

Before moving to FNC’s Atlanta bureau, Jonathan reported from the Los Angeles and Seattle bureaus, where he covered the 1999 World Trade Organization riots and the 2001 Seattle earthquake.

Prior to FNC, Serrie reported for WSB-TV (ABC 2) in Atlanta, GA from 1994-1999. There he earned two Southern Regional Emmys. He also covered the Susan Smith murder investigation and the search for the 1996 Olympic Park bomber. From 1989-1994, he served as a morning anchor for WYFF-TV (NBC 4) in Greenville, South Carolina. He began his career at WWSB-TV (ABC 7), in Sarasota, Florida as the sole broadcast reporter.

He has an estimated net worth of $3 million.