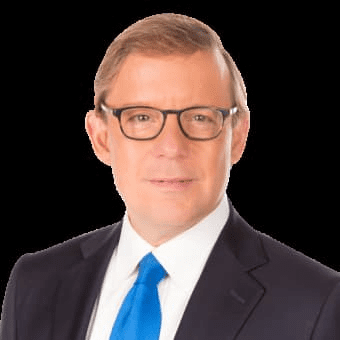 Eric Shawn is a television personality serving as an anchor and senior correspondent for Fox News Channel based in New York. He anchors America’s News Headquarters (Saturdays 4-6PM/ET and Sundays 1-2PM/ET and 4-5PM/ET) alongside Arthel Neville. He is also the host of Riddle: The Search for James R. Hoffa on FOX Nation.

Shawn graduated from Trinity School in New York City. He also earned a Bachelor of Arts degree in Urban Studies from Georgetown University.

Shawn is the son of Gilbert Shawn(father) and Melba Rae(mother). His mother was an actress best known for her long-running role as Marge Bergman on Search for Tomorrow. She passed away on December 29, 1971 aged 49 years in New York Hospital due to cerebral hemorrhage.

His father moved to Orlando, Florida later in life, where he died at the age of 84 in 2005.

Shawn has a sister. However, her name is unknown.

Eric is married to Lisa Shawn. The couple met as students at Georgetown University. They also have a son, Oliver who lives in Boston.

During an interview with Politico Staff, on March 12, 2019, Eric finally revealed his family;

How/where are you celebrating your birthday and with whom?

“I will have a quiet dinner at my current favorite Italian restaurant, Antonucci, on Manhattan’s Upper East Side, with my wonderful wife Lisa. (We met as students at Georgetown, and so we got to start our adventure in life together early on in our lives!) I will be no doubt be ordering their clams, done in an amazing white wine broth with herbs and — the star ingredient — pancetta.”

“Ah … it’s the little things. My only request: please, no candles on the dessert! Our son Oliver lives in Boston and, as is our family tradition, I anticipate a birthday call at 12:01 a.m. Those greetings mean the world. The more birthdays that I notch on the belt, the more reflective I find myself … the more appreciative I become of a loving family that I cherish and a career that has given me the opportunity to do what I love best…what I’ve been doing since my teen years, really.”

Shawn joined Fox News Channel in 1996 when it launched. He is an anchor and senior correspondent based in New York. He anchors America’s News Headquarters (Saturdays 4-6PM/ET and Sundays 1-2PM/ET and 4-5PM/ET). Shawn is also the host of Riddle: The Search for James R. Hoffa on FOX Nation, FNC’s on-demand subscription-based streaming service, which is based upon his extensive reporting into the appearance of notorious Teamsters boss Jimmy Hoffa.

During his time at FNC, Shawn has regularly reported from the United Nations and has specialized in politics and terrorism, including anchoring hour-long news specials on topics ranging from election coverage to investigative documentaries as well as breaking news. He has also provided live coverage of every major political cycle for the network since joining in 1996. Shawn also covered September 11 from Ground Zero for months after the towers collapsed and subsequently covered additional U.S. terror cases. In 2004, he led a Fox News investigation that uncovered new evidence in the murder of Teamsters leader Jimmy Hoffa, based on the claims of hit-man Frank Sheeran, who admitted to Shawn, and in his biography, that he shot Hoffa in a house in Detroit. The investigation revealed a “blood pattern” on the floor of the house that fit Sheeran’s story precisely.

Most recently, he provided the latest breaking election news from New York and Pennsylvania during FNC’s Democracy 2020 election coverage.

Previously, Shawn reported on the O.J. Simpson murder trial, the Iraq War diplomatic developments at the United Nations, the Michael Skakel trial, the death of Princess Diana, and other breaking stories around the globe. He has interviewed world leaders from President Bill Clinton, to U.N. Secretary Generals Kofi Annan and Ban Ki Moon, as well as Israeli Prime Ministers Shimon Peres, Benjamin Netanyahu, Ehud Barak, Ehud Olmert and Ariel Sharon. He also sat down with Iranian President Mahmoud Ahmadinejad for an extensive in-depth interview in September, 2010 and has also interviewed Venezuelan President Hugo Chavez. Shawn’s interview with Pakistan activist and former Prime Minister Benazir Bhutto was conducted just a few months before her assassination, in 2007.

He first started covering terrorist attacks against America with the shooting in 1990 of Rabbi Meir Kahane, the 1993 bombing of the World Trade Center and New York City bombing plot, the 1996 Khobar Towers bombing, and the attacks and aftermath of 9/11.

Prior to joining Fox News Channel in 1996, Shawn served as a correspondent for FOX News Edge.

He covered numerous breaking news stories, including the Unabomber arrest, the TWA flight 800 crash, the siege in Waco, Texas, the Freeman standoff, the William Kennedy Smith trial, the 1992 Clinton campaign, as well as the White House.

Eric also served as a war correspondent in the Persian Gulf and Somalia. He provided daily reports for the 1995 murder trial of O.J. Simpson direct from the courthouse in Los Angeles. Before that, he was a reporter for WNYW-TV (FOX) in New York beginning in 1989. Prior to that, Shawn was an anchor and reporter at WPIX-TV and WNYC-TV, in New York. He was also a correspondent for the FOX Network News magazine, FOX Files.

He is the author of the book “The U.N. Exposed: How the United Nations Sabotages America’s Security and Fails the World.” (May 4, 2006).

He has not revealed his political party publicly.