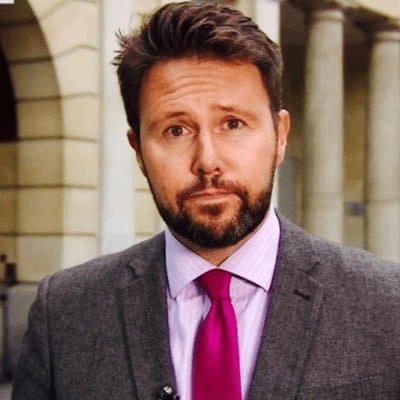 Jon Kay is a media personality working as a news correspondent for BBC News covering the South-West of the country. He is also a regular presenter on BBC Breakfast since 2010.

He was born on November 8, 1969 in Kingston upon Hull, United Kingdom.

He is tall in stature however his exact height is undisclosed.

Kay belongs to the British nationality.

He spent a year at a high-school in California. Later on at the age of 18, he enrolled at the University of Exeter in Devon in 1989 and graduated in 1992 with a Bachelor of Arts in Politics. While “mucking around” in the studios of the University Radio Exeter, it was when he decided to pursue a career in Broadcast Journalism.

Born in Hull, Jon grew up in Cheshire. He is the son of  Terry Kay and Tommie Duncan. He also has three siblings: Terri Kerr Kay, Scott Kay and Heather Flury Kay.

Kay is married to Francesca Kasteliz, a former fellow journalist and BBC News Correspondent. The couple met in the Bristol newsroom and tied the knot in 1998. Currently, Francesca is a Television presenting coach.

Kay and his wife spent a year travelling round the world reporting. They went through China, South East Asia, Australia and Central America. In Mexico they found themselves in the middle of a deadly hurricane.

The couple have three children.

Kay is a news correspondent for BBC News covering the South-West of the country. He is also a regular presenter on BBC Breakfast since 2010.

In 1993, Jon joined the BBC as a trainee reporter, working at local radio stations from Newcastle to Suffolk. After working in local radio and regional TV in Bristol, he went to London to work as a political reporter and news correspondent.

He spent a year travelling round the world with his wife (who’s also a journalist), reporting as they went through China, South East Asia, Australasia and Central America. In Mexico they found themselves in the middle of a deadly hurricane.

Kay has done several stints abroad as a BBC foreign correspondent including Los Angeles and Washington DC. He’s also worked all over Europe. Additionally, he has presented all kinds of programmes for the BBC. He has anchored Drive on 5 live, documentaries for Radio 4, the BBC Two environmental series It’s Not Easy Being Green and a documentary about bread-making for BBC Four.

Jon Kay Salary and Net Worth