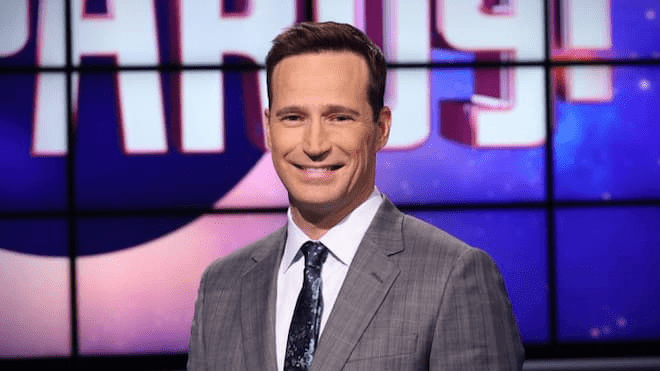 Mike Richards is a three-time Daytime Emmy® Award winner and 17-time nominee. He is also the executive producer of  “Wheel of Fortune” and Jeopardy!

Richards was born on July 5, 1975, in Burbank, California, United States.

Richards was born in Burbank, California, and he grew up in La Canada, California. However, there is no information about his parents. He hasn’t also shared whether he has siblings or not.

He is married to Stephanie Richards and they have two sons.

On August 11, 2021, it was announced that Richards will succeed Trebek as host of the daily show, Jeopardy! with guest host Mayim Bialik hosting future primetime specials and spinoffs. He is also the executive producer of both Jeopardy! and Wheel of Fortune. He joined Jeopardy! in 2020 in the middle of the pandemic after producing over 4,000 hours of game show programming.

Early this year(2021) Richards spent two weeks as guest host of Jeopardy! filling in for Alex Trebek. Alex passed on in 2020 after hosting the show for 37 years. Previously, Mike was in “advanced negotiations” to become the next permanent host.

“It has been the honor of my life,” Richards told Parade.com about guest hosting Jeopardy! “I felt even closer to the contestants than usual. I am always pulling for the contestants to succeed, but as host, I was living and dying on their responses, especially on the Daily Doubles.”

Richards joined an impressive roster of Jeopardy! guest hosts including Dr. Mehmet Oz, Anderson Cooper, Savannah Guthrie, Dr. Sanjay Gupta, Katie Couric, Aaron Rodgers, Bill Whitaker, Levar Burton, and Mayim Bialik. During his first week of hosting, he explained that because of the pandemic some guest hosts were reluctant to tape the show just yet. So in the interest of Jeopardy!, he stepped in at the last minute.

“I’m hosting today and for the next two weeks to keep the greatest quiz show in the world going. We have some amazing guest hosts coming, that I can’t wait for you to see. But with the COVID outbreak here in LA, folks were understandably a little reticent to shoot,” said Richards.

However, on August 20, 2021, Richards announced he will be stepping down as host of Jeopardy! amid recent scrutiny over past comments about women, Jews, and poor people.

“I was deeply honored to be asked to host the syndicated show and was thrilled by the opportunity to expand my role. However, over the last several days it has become clear that moving forward as host would be too much of a distraction for our fans and not the right move for the show,” Richards said in a statement.

“As such, I will be stepping down as host effective immediately. As a result, we will be canceling production today,” he added.

“I want to apologize to each of you for the unwanted negative attention that has come to ‘Jeopardy!’ over the last few weeks and for the confusion and delays this is now causing. I know I have a lot of work to do to regain your trust and confidence,” Richards said.

Richards is a three-time Daytime Emmy® Award winner and 17-time nominee. He is also the executive producer of two of the most successful game shows of all time: “Wheel of Fortune” and Jeopardy! He joined the iconic syndicated stalwarts in 2020 after producing over 4,000 hours of game show programming.

Most recently, he served as executive producer of the 2020 celebrity-driven revival of “Who Wants to Be a Millionaire” as part of an overall deal with Sony Pictures Television to develop and produce game shows for network, cable, and streaming platforms.

Throughout his career, Richards has produced a wide range of programs, including talk shows, dating shows, celebrity shows, reality shows, clip shows, game shows, and cable news. Early on, Richards worked for television legend Dick Clark as his vice president of development and current programs. During his time with Clark, he produced several awards shows and prime-time shows and was a correspondent on “The American Music Awards” and “Primetime New Year’s Rockin’ Eve.”

In addition to his work behind the scenes, Richards has experience in front of the camera. After graduating college, Richards was a stand-up comedian, which led to offers to serve as a host for multiple pilots. He hosted the WB’s “High School Reunion,” and later was the host of the reality phenomenon “Beauty and the Geek” for the CW. During that time, he also hosted a movie news show called “Dailies” that launched the Reelz channel. More recently, he hosted the 2012 revival of “The Pyramid” and the Game Show Network’s 2016-2017 version of “Divided,” which was a part game show and part social experiment.