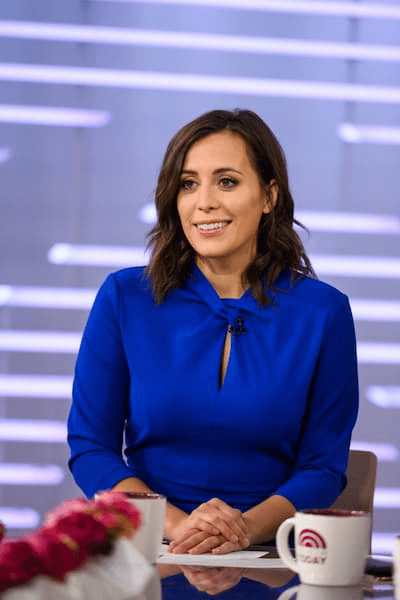 Hallie Jackson is a media personality serving as a senior Washington Correspondent for NBC. She is also the anchor of Hallie Jackson Report on MSNBC at 10amET on Weekdays. Previously, she was a chief White House correspondent at NBC News.

Jackson studied at Pennsbury High School and graduated in 2002. She also graduated Phi Beta Kappa from Johns Hopkins University with a Bachelor of Arts degree in Political Science.

Born in the United States, Hallie is the daughter of Heidi and David Jackson. However, it is not known whether she has siblings or not.

Jackson is currently with her partner, Frank Thorp. Thorp is a producer and an Off-Air reporter at NBC News. Previously, Hallie was married to Doug Hitchner, a baseball player and coach. She married Doug in 2011. However, it is not clear whether they are divorced or not.

Jackson and her partner, Thorp welcomed their daughter, Monroe Thorp on March 9, 2020.

In 2006, Hallie began her journalism career at WBOC-TV in the towns of Salisbury, Maryland, and Dover, Delaware. Upon her departure, she joined WFSB-TV in the cities of Hartford, Connecticut, and New Haven, Connecticut, in 2008.

In 2012, her career led her to Hearst Corporation, where she reported for their 26 stations from Washington, D.C. She later became a reporter and journalist for NBC News in 2014. While there, she covered the Ted Cruz presidential campaign for the network as their embedded reporter. In late summer 2016, Jackson began anchoring the 1 P.M. ET edition of MSNBC Live, NBC News’s daytime coverage platform. In January 2017, NBC named Jackson as its chief White House correspondent, while also stating that she would transition time slots and anchor MSNBC’s 10:00 a.m. hour.

On May 27, 2020, Jackson was honored by Johns Hopkins University to give special remarks at the 2020 commencement ceremony.