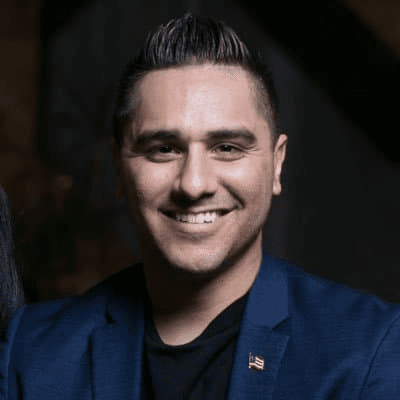 Drew Hernandez is a media personality serving as the host of the “Drew Hernandez Live” show. He is also an investigative reporter and a political commentator.

Hernandez is American by nationality.

At the age of 19, Drew was enlisted in the United States Army for a 7-year tour. Following two deployments in Iraq and Afghanistan, he studied Business Management at Hostos Community College in Bronx, New York.

Born and raised in New York, Hernandez is the son of Dominican Republic immigrants. His father worked as a doorman in a downtown building while his mother was the nurse’s Spanish interpreter.

Despite being a news personality, Drew has managed to keep his personal life away from the limelight. Therefore, it is not known whether he is married, single, or in a relationship.

Drew is the host of the “Drew Hernandez Live” show on YouTube where he documents and speaks on current events surrounding politics. He’s also an investigative reporter and a political commentator.

He was a member of the police force in the military from 2006 to 2011 including tours in Iraq and Afghanistan. While serving as a private contractor in Iraq in 2015, he started his Facebook page, A Combat Veteran. He went on to promote his first film, 10 Ways to Identify A Combat Veteran, a satirical comedy that quickly went viral. The video had 1.5million views in just 3 days after its release.

On November 19, 2021, Hernandez was on “Fox And Friends” where he gave a passionate speech about the verdict in the Kyle Rittenhouse trial. He was also a witness during the trial since he was recording the events live at the time.

First talks about what he saw in Rittenhouse’s reaction was when the not guilty verdict was read aloud:

“Watching Kyle just buckle, literally collapse, that was not some punk kid that realized he just got off the hook. That was a human being that understood that his life was literally on the line, that a lie was about to put him behind bars for the rest of his life.”

“And that’s not my opinion. I was there from night one.”

“There are literally millions of people in this country that still believe right now that Kyle Rittenhouse was a white supremacist on a rampage, an active shooter that showed up to Kenosha to shoot black people! It’s just simply not true!”

“Kyle Rittenhouse shot and killed a convicted child rapist, Joseph Rosenbaum, that was charging him from behind. America can decide for itself whether that was a psychopath or not.”