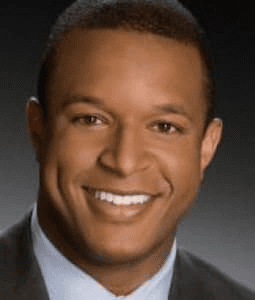 Craig Melvin is an American media personality serving as an anchor at NBC News. He is also a former anchor for MSNBC. In addition, he is the author of Pops: Learning to Be a Son and a Father, which discusses fatherhood, addiction, and resiliency.

Melvin attended Columbia High School. He also graduated from Wofford College with a Bachelor of Arts degree in Government in 2001.

He is a member of the Kappa Sigma fraternity and also served as a senior counselor for South Carolina’s Palmetto Boys State program.

Melvin first worked at WIS while still in high school. He served as an Our Generation Reporter from 1995 to ’97. In 1996, he won an Associated Press award for his story on innovative teaching. He was one of the youngest ever to win such an award.

Craig is the son of Lawrence and Betty Melvin. Growing up in Columbia, South Carolina, Craig had a complicated relationship with his father.

“My dad was such an enigma to me growing up,” Craig exclusively shared with E! News. “I think it cultivated that curiosity. There was just so much I didn’t know about him and so much I was afraid to ask.”

But in his new book titled Pops: Learning to Be a Son and a Father, Craig was able to connect with his dad on a whole new level and receive answers to some of his most burning questions.

In Pops, Craig recalls his father’s battle with multiple addictions and the pain it caused his family. While teachers and extended relatives stepped up in more ways than one, Craig says his mom, deserves a whole lot of credit for keeping her children on the right track.

“For a number of years, my mom was playing the role of mom and dad,” he explained. “I write in the book about her picking up a second job at a pharmacy to help make ends meet because dad was losing his battle with gambling addiction.”

Craig also gives thanks to his mom for exposing him to the power of faith, especially when things became uncertain at home.

He has a younger brother, Ryan Melvin, and an older half-brother, Rev. Lawrence Meadows, who died from colon cancer on December 9, 2020, at the age of 43.

Craig is married to his wife Lindsay Czarniak, a sports anchor and reporter. She is the daughter of Chet and Terri. Chet worked for the sports department at a W ashington, D.C.-based newspaper for 17 years before becoming the current managing editor of usatoday.com. Terri on the other hand is a former principal at Rose Hill Elementary School, a Fairfax County public school, in Alexandria, Virginia.

The couple met while Craig worked at NBC4 after Czarniak had returned from covering the 2008 Summer Olympics.

Lindsay works for Fox Sports as a studio host for NASCAR coverage and a sideline reporter for NFL games. After spending six years with WRC-TV, the NBC-owned-and-operated station in Washington, D.C., she joined ESPN as a SportsCenter anchor in August 2011 and left ESPN in 2017. She has also been a pit reporter and studio host for TNT’s NASCAR Sprint Cup Series coverage and a former co-host and reporter for the syndicated The George Michael Sports Machine. In addition, she served as a host and sports desk reporter for NBC Sports coverage of the 2008 Summer Olympics in Beijing, China.

Lindsay has a brother, Andrew, who is a 2005 graduate of the United States Coast Guard Academy and is currently serving in the U.S. Coast Guard.

She also appeared in the 2000 independent action film Aquarius, in which she played a character named Mist. In 2009, she made a cameo appearance in the indie film Ghosts Don’t Exist from executive producer Chris Cooley.

Melvin has two children. In March 2014, his wife Lindsay gave birth to their first son Delano Melvin. On June 16, 2016, Lindsay announced that she was pregnant again on SportsCenter before that night’s Game 6 of the 2016 NBA Finals in Cleveland. She gave birth to her second child, a daughter, Sybil Ann in November 2016.

The couple called the baby “Sibby” — short for a sibling — as a way for Delano to identify the unborn baby. Eventually, when she was born they “fell in love with the name” and it stuck, they confessed to PEOPLE.

Melvin is an American journalist and anchor at NBC News and a former anchor for MSNBC. He hails from Columbia, South Carolina, and got his start in journalism when he began working at NBC-affiliate WIS-TV. In 2008, he left WIS-TV and joined NBC’s WRC-TV station in Washington, DC, where he anchored the weekend evening newscasts.

Melvin left that post three years later and landed a job at MSNBC as a daytime anchor while also contributing to NBC News as a reporter. The journalist became a permanent co-host of Today Third Hour a year after being named a Today show anchor in 2018.

He is also the author of Pops: Learning to Be a Son and a Father, which discusses fatherhood, addiction, and resiliency.

Back in March, an MSNBC representative confirmed with the LA Times that Melvin’s double duty as an anchor for MSNBC and Today would come to an end. The busy journalist officially stepped down from his MSNBC position on March 31, 2022.

In May Craig and his family tested positive for Covid 19. He called into the 3rd Hour of TODAY to share an update on his condition and that of his family.

The father of two said his family is vaccinated and boosted and is “doing all right,” adding that their mild symptoms include cough and fatigue.

“Compared to what some other folks are dealing with, it’s not that bad,” he shared.

Melvin earns an average salary of $3 million per year.

He has an estimated net worth of $9 million.