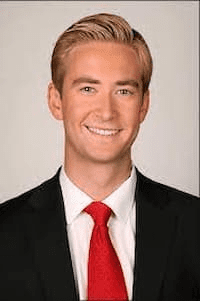 Peter Doocy is a media personality serving as a white house correspondent at fox News. He has been at the station since 2009. Previously, he was a student reporter at the palestra, FNC’s partner site.

Doocy is American by Nationality.

He graduated from Villanova University with a Bachelor of Arts degree in political science in 2009. While in college, he contributed to Fox News as a Palestra.net reporter.

Doocy is the eldest child of Steve Doocy and Kathy Gerrity. His father is a co-host of the morning show “Fox & Friends,” However, he was raised in New York after his family relocated when he was two years. Additionally, he was raised along with his two younger sisters, Sally Doocy and Mary Doocy. He also officiated the wedding of her sister Sally on August 1., 2020.

In April 2021, Doocy married Hillary Vaughn, a Fox Business correspondent. The duo tied the knot at the palm meadow Bluff Resort in south Carolina. Additionally, his father was the best man at his wedding.

Doocy was hired by Fox News in 2009 after graduating from college; he spent time in New York and Chicago before relocating to Washington, D.C., in 2010.

In 2014, he obtained an exclusive TV interview with former Navy SEAL Robert J. O’Neill, who claims to have fired the shot that killed Osama bin Laden. That special reportedly had the highest ratings of any documentary in Fox News history.

In October 2017, Doocy asked Senator John McCain (R-AZ), “Has your relationship with the president frayed to the point that you’re not going to support anything that he comes to you and asks for?” McCain responded, “Why would you say something that stupid? Why would you ask something that dumb, huh? … That’s a dumb question.”

He was a campaign reporter in the 2018 midterm elections.

After covering a White House East Room meeting focused on economic competitiveness and inflation, a departing Doocy called out to Biden: “Do you think inflation is a political liability in the midterms?” Lowering his voice, and turning slightly away from the hot mic beneath him; as ABC reported, “Biden responded with sarcasm, ‘It’s a great asset — more inflation.’ Then he shook his head and added, ‘What a stupid son of a bitch.’ Some sources have speculated about whether or not Biden intended to have his comments picked up by the microphone. Doocy within an hour to clear the air. According to Doocy, Biden said, “It’s nothing personal, pal.”