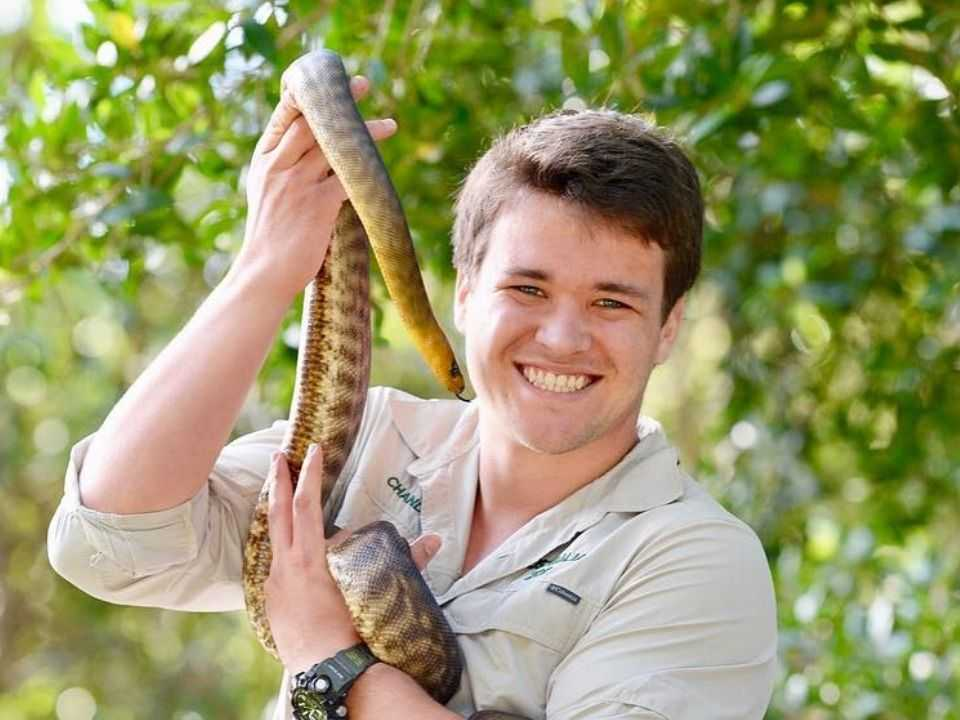 Chandler Powell is a staff member of the Australia Zoo in Queensland. He was named Global Ambassador for Australia Zoo’s Wildlife Warriors in 2015 with a feature in the Winter 2015 issue of ‘Crikey!’ magazine. He is also a professional wakeboarder and he won a triple crown title in the year 2014 and was ranked number three in the Wake Park World Series.

Powell was born on November 14, 1996 in Seffner, Florida, United States.

He stands at a height of 5 feet 10 inches tall.

Powell went to the University of Central Florida, majoring in Marketing with a minor in International Business.

He is the son of Shannan and Chris Powell. His father is also a wakeboarder and had participated in the very first Wakeboarding competition. His parents live just outside of Tampa, Florida.

Powell has a brother called Cameron. One week after Chandler and his wife, Bindi announced they will welcome their first child in 2021, comes news Chandler’s brother, Cameron, is also expecting a baby with his wife, Kristin.

“Yep, not one, but [2] baby Powell’s on the way! Our start to grandparenthood in 2021 just got even better. Can’t wait to meet these precious babies,” family patriarch Chris Powell recently announced on Instagram.

Powell is married to Bindi Irwin, an Australian television personality, conservationist, zookeeper and actress. They got married on March 25, 2020 in an intimate ceremony at the Australian Zoo without any guests (except Bindi’s mom, Terri Irwin and her brother, Robert Irwin).

The couple first met at Australia Zoo in November 2013. Chandler was on a trip to Australia for a national wakeboarding competition and he decided to pay a visit to the Irwin’s Australia Zoo located on Queensland’s Sunshine Coast. Bindi was leading the zoo tours that day.

In July 2019, the night before Bindi’s 21st birthday, Chandler took to Instagram for a sweet tribute to his then girlfriend.

“Beautiful Bee, I love you so much,” he wrote. “You’re my best friend and whole world. I can’t wait to celebrate your birthday tomorrow at #AustraliaZoo Here’s to another year and beyond of life changing adventures together.”

Chandler proposed to Bindi on her birth day.Bindi is the daughter of the late Steve Irwin, a conservationist and television personality popularly known as the Crocodile Hunter and Terri Irwin, a conservationist and the owner of Australia Zoo. She hosted Bindi the Jungle Girl, a children’s wildlife documentary TV series when she was nine years. She has created two instructional fitness DVDs and has also won season 21 of Dancing with the Stars (US). Currently, she stars alongside her mother Terri and her younger brother Robert in Crikey! It’s the Irwins.

Powell together with his wife, Bindi welcomed their first baby, Grace Warrior Irwin Powell on their first wedding anniversary day. Grace was born at 5.52pm on March 25, 2021 weighing 3.37 kilograms (7 pounds, 7 ounces) and measuring 50.8 centimeters in length. He took to his social media page to share the good news.

As a child, Chandler discovered a love for the sport of wakeboarding. He began to compete professionally at the age of 15 and earned several sponsorships that helped him compete around the world. However, it seemed he gave it up in 2016, as he hasn’t raced since then. Currently, Chandler works at the Australia Zoo in Queensland with Bindi. He’s also an active member of the Wildlife Warriors program, which was founded by Steve and Terri Irwin in 2002.