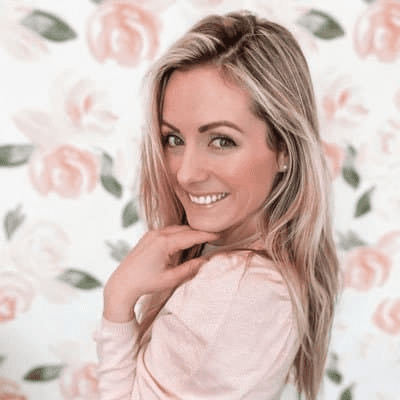 Waddell is well-educated. She graduated with a Bachelor of Arts degree in Musical Theatre Performance from the University of Oklahoma in 2007. She also attended musical theatre at the Tisch School of the Arts, New York University.

Carly was born in Texas to her parents Maryann Waddell (mother) and Jeff Waddell (father).

She was raised alongside her two brothers; Zak Waddell and Denton Waddell. Her brother, Zak, appeared on the 9th season of The Bachelorette. Although he made it to the final four he didn’t find his happily ever after on the show. Later on, Zak met Elizabeth Coulon and they tied the knot in 2015. In 2017, they got their firstborn baby.

On February 19, 2021, her brother, Denton married. Carly shared the news through a post on her Instagram account captioned; “Some of y’all have been asking where I was this week because I should be a foot deep in snow right now. I was at my brother @dentwad and sister in laws @sarrwad wedding in beautiful sunny Florida! (Socially distant and only immediate family of course) If you’re thinking of getting married in Florida, you need to check out this gorgeous private oceanfront venue @harbourhouseoceanfront! It’s such a PERFECT place for a destination wedding. It’s All-Inclusive…from the planning to the decorating and flowers, they handled everything! They took such great care of my family and everything was breathtaking. Such a perfect day.”

Evan Bass is the ex-husband of Waddell. She was married to him until December 2020 when they separated. In a joint statement, they shared that they’ve separated.

Bass is an erectile dysfunction specialist and a television personality. He has also appeared as a contestant on the Reality television shows, The Bachelorette and Bachelor in Paradise.

The ex-couple tied the knot in 2017 at a beach in Puerta Vallarta, Mexico. The ceremony was officiated by Chris Harrison. They met and got engaged on Bachelor in Paradise season three in 2016.

Bass was also previously in a relationship and had three sons; Nathan, Liam, and Ensley before he married Waddell.

Waddell together with her ex-husband, Evan Bass have two children; a daughter, Isabella “Bella” Evelyn Bass born on February 15, 2018, and a son, Charles “Charlie” Wolfe Bass born on November 12, 2019.

Her son’s gender was revealed on the season finale of the 2019 season of Bachelor in Paradise.

On June 15, 2021, Carly was rushed to the hospital by ambulance after she had health complications. Even though it’s still unknown what she’s suffering from, her ex-husband, Evan Bass said that he’ll let her be the one to tell her fans.

He shared the sad news on social media adding that after 9 hours at the hospital they were able to return home even though they were likely to go back to the hospital since Carly was still in rough shape.

Waddell has an estimated net worth ranging between $1 million to $5 million.