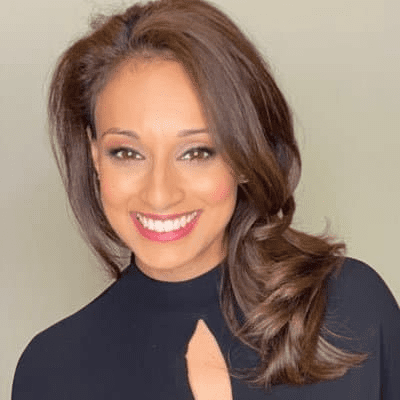 Seema Jaswal is a British television personality and radio presenter. She is also the host of Premiere League Production, Euro 2020 on ITV, and World Snooker Championship and Welsh Open Snooker on BBC. Previously, she hosted Motorsport for Channel 4. She was also part of ITV’s World Cup 2018 coverage.

She is a British citizen. She also belongs to the Asian ethnicity.

Jaswal studied Sociology at Royal Holloway, University of London, and graduated with a 2:1 Honors in Sociology with Politics in 2007. She’s also a graduate of Grey Court School and Richmond College.

Seema’s parents grew up in Uganda, however, their names are unknown. Her grandfather was a tennis player champion in Uganda.

Growing up, she was raised in a sporting family. This encouraged her to engage in various sports such as netball and rugby.

Jaswal has also not shared with the public whether she has siblings or not.

Jaswal is married, however, she is keeping a low profile on her marriage and her husband. She hasn’t also revealed whether she’s been blessed with kids or not.

Jaswal is part of the ITV Pundit on Euro 2020. Unlike the other presenters, it will be her first time presenting live match coverage at a major tournament for ITV.

Prior to Euro 2020, she hosted the Premier League’s worldwide coverage for Premier League Productions which included flagship shows Kick Off and Fanzone. She also hosted Motorsport for Channel 4.

Jaswal also reports on the BBC’s coverage of the World Snooker Championships and Channel 4’s BDO Darts. She is also the eSports host of Gfinity Elite Series FIFA18.

In addition, she was part of ITV’s World Cup 2018 coverage, presenting pre-game reports and outside-broadcast interviews from locations around Russia.

Previously she presented the FIFA U17 World Cup draw and Tournament for Sony Six in October 2017. In 2017, Jaswal won a Media Award at the Asian Football Awards.

The media personality is also an ambassador for a meningitis charity. She suffered meningitis when she was only 16 years old.

“I was working in a café and I felt a pounding headache and pains in my neck. I came home and just fell asleep on the sofa. My mum knew the signs of meningitis and she called the paramedics. They took me in an ambulance and I fell into a coma.”

“When I came out of it, I woke up to a lumbar puncture (a needle inserted between the vertebrae to remove a sample of cerebrospinal fluid). I needed two weeks in hospital to regain my strength but I was so lucky to come through it without a disability.”

The doctors told her that if she wasn’t fit and healthy she might not have come through it. Same reason she’s so passionate about sports.