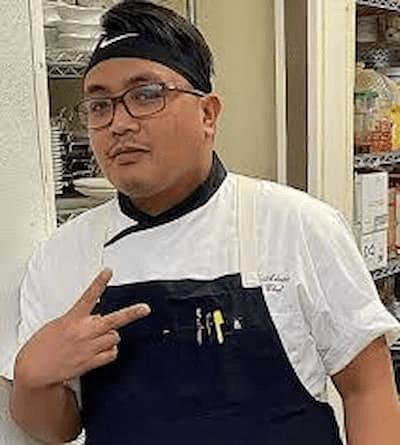 Zachary Adams is a professional chef and one of the contestants in Season One of the Next Level Chef. He was eliminated on February 2, 2022, before the season’s finale on March 2, 2022. Currently, he is a sous chef at the North Shore Country Club.

He is 27 years old. He was born in Manila, Philippines.

Zachary was born in Manila, Philippines, and currently lives in Milwaukee, Wisconsin where he was raised.

Recently he revealed on his Instagram page that he has three moms, a birth mother, a foster mother, and an adoptive mother, Terry.

“I have had three moms throughout the course of my life…my birth mother, my foster mother, and my adoptive mother, and I am eternally grateful for all of them.”

“My birth mom made the hardest decision a mother has to make and gave me up for adoption so that I could have a better life and there are no words in the English dictionary that describe how truly grateful I am for her. If she never would have made that choice I would have never met my adoptive mom Terry/ the rest of my family and I would’ve lived a life of extreme poverty and hardship but my adoptive mom made sure I had everything in life that I ever needed to succeed and become the man I was meant to be!!!”

Adams has managed to keep his personal life away from the limelight. Therefore, he hasn’t disclosed whether he is married, single, or in a relationship.

Zachary is a professional chef. He was one of the contestants in season 1 of the Next Level Chef, a brand new culinary competition created by Chef Gordon Ramsay. The show debuted on January 2, 2022, at 7 p.m. CST on FOX following the NFL on FOX doubleheader.

Its unique concept is explained in the official synopsis of the competition series.

“NEXT LEVEL CHEF is the next evolution in culinary competitions, as Ramsay has designed a unique culinary glove, set on an iconic stage as you’ve never seen before. Over three floors, each floor contains a stunningly different kitchen. ”

“From the gleaming upper floor to the challenging basement floor, the ingredients will suit the environment, as Ramsay believes a real test of great chefs is not only what they can do in the best of circumstances, but also what magic they can create in the worst!”

Prior to the Next Level Chef, Zachary had a work experience in the kitchen at View MKE and Third Coast Provisions. He is also a sous chef at the North Shore Country Club. He has struggled to achieve the success he is experiencing today. When he started his first kitchen job, he had to deal with drunken and drugged colleagues and customers. In fact, he was once targeted, which was covered by information channels.

Despite all the hard work, Zachary put on the Next Level Chef he never made it to the top. He was eliminated on February 2, 2022, before the season’s finale on March 2, 2022. Stephanie “Pyet” Despain, a social media chef from Kansas City, Kansas emerged as the winner.

The second season will premiere on February 12, 2023, serving as the Super Bowl LVII lead-out program.