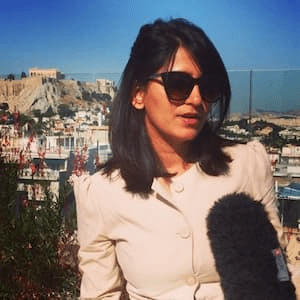 Yogita Limaye is a media personality serving as BBC News South Asia Correspondent. She has worked with the BBC for nearly a decade. Previously, she covered major economic and business stories from India for global and UK outlets of the BBC on television, radio, and digital platforms as an India Business Correspondent.

She was born in the city of Pune in west India. However, her age is unknown.

Yogita graduated from Savitribai Phule Pune University with a Bachelor of Engineering (B.E.) in Electronics & Telecom in 2004. She wrote software programs for a year before switching careers to journalism.

In 2006, she received a Post Graduate Diploma in Broadcast Journalism from the Asian College of Journalism.

Just like her father Yogita also pursued Engineering before switching to journalism. Yogita lost her father in May 2022.

“Will always be grateful he saw one of his biggest dreams come true. So many words today in the press, in messages and in calls, on the engineer, boss, colleague, friend, and human being he was. Some day I will find the words to describe the kind of father he was,” Yogita wrote on her social media account.

Despite being a media personality Limaye has managed to keep her personal life away from the limelight. Therefore, it is not known whether she is married, single, or in a relationship.

Yogita is a BBC News correspondent who covers South Asia and international news. She has worked with the BBC for nearly a decade producing video, radio, and text reports for global and UK outlets of BBC News.

Yogita has covered top global stories including the Ukraine war, the Taliban’s takeover of Afghanistan, the covid crisis in India, the Rohingya refugee crisis, elections in India, Bangladesh, and Sri Lanka, the 2015 Nepal earthquake, and the 2008 Mumbai attacks.

Yogita is an experienced presenter. She has anchored shows like Talking Business, India Business Report, Reinventing India, and Witness, and hosted live events including the BBC’s annual Indian Sportswoman of the Year award.

Prior to working at the BBC, Yogita was an anchor and senior correspondent at CNN IBN.

Yogita Limaye Salary and Net Worth