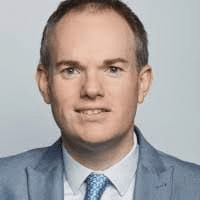 Gordon Chree is a media personality serving as a senior reporter and presenter at STV News. Before joining STV News he worked for several commercial radio stations, including the now-defunct Edinburgh station Talk 107.

He received a Bachelor of Arts (BA) in Journalism with distinction from Edinburgh Napier University in 1999.

He is married to his wife Lindsay Chree and together they have two kids, a daughter, and a son.

Chree is a senior reporter and presenter at STV News and has covered many of the big stories across Scotland and beyond, from the Glasgow Airport terrorist attack to the French presidential elections and the ongoing COVID-19 pandemic.

He is also an occasional relief anchor on the East edition of STV News at Six, and the online video blog Not The Real MacKay.

Prior to STV, Chree worked for several commercial radio stations, including the now-defunct Edinburgh station Talk 107.

On March 18, 2022, Gordon was presenting a report on families fleeing the war-torn country (Ukraine) when he was interrupted by two boys shouting into the camera. He quickly apologized to viewers for the disruption and brushed the youths aside.

Some social media users didn’t see the funny side and hit out at the boys for interrupting the report.

One said: “Why people think behavior like that is acceptable is beyond me. No respect. Their families must be so proud of them for showing themselves up on TV for all to see. Glad you are ok Gordon, always the professional!”

Another commented: “You handled it well, although things like that should never happen when a reporter is trying to bring you the news.”

A third added: “Zero need for them to act like that.”

“I think most people would not regard this as a laughing matter, particularly given the subject matter of the programme.”

Gordon Chree Salary and Net Worth