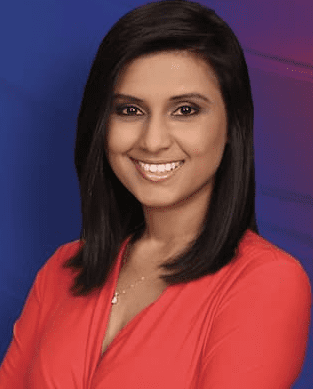 Trishna Begam is an American media personality serving as a news anchor/reporter at NEWS10ABC. She joined NEWS10ABC in September 2012 and currently co-anchors the 7 pm newscast on Fox23 with Lydia Kulbida. Previously, she worked in Augusta, Georgia reporting and anchoring for WRDW.

Begam is in her 30s. However, her date, month, and year of birth are undisclosed.

Begam graduated from the University of Georgia in 2008 with a Bachelor of Arts in Broadcast Journalism.

Trishna is an only child. She grew up in Suwanee, Georgia, just outside of Atlanta, and is a proud Georgia Bulldog. In Sanskrit, Trishna means “longing” or “desire.”

“My mom chose the name after having trouble conceiving and waiting a long eight years to have a baby,” she said.

She enjoys fishing since it’s something she did with her dad a lot while growing up. However, her dad lost his eyesight later in life and they don’t get to do it anymore. But, she has some great memories attached to her time fishing with her dad. She also discovered running later in life. Good heart health and eating well are extremely important to her as both of her parents have heart disease.

Trishna is married to Nol an Begam

Advertisement
. The couple tied the knot on August 16, 2013. They have been together for 14 years and they live in Latham with their son, Konrad; daughter, Aria, and dog, Walter. Walter is a rescue dog from Georgia. He’s named after the character of Walter Bishop from the show sci-fi show Fringe.

After graduating college, Trishna lived in South Korea for a year, teaching English to fourth and fifth graders. Her husband, who is from Philadelphia, had a similar game plan after college.

“So yeah, I’m from Georgia, he’s from Pennsylvania and we met half a world away in South Korea. It was one of the best years of my life,” she said.

Trishna is a news anchor/reporter at NEWS10ABC. She joined NEWS10ABC in September 2012 and currently co-anchors the 7 pm newscast on Fox23 with Lydia Kulbida.

At News10 she has covered major breaking news traveling to Sandy Hook, Connecticut to report on the school shooting massacre at Sandy Hook Elementary and traveling to Boston to report on the Marathon Bombings. She has also worked on a number of special reports including a series of stories covering the heroin epidemic in the Capital Region and school bullying issues, both of which were nominated for New York Emmy Awards.

Before calling Albany home, Trishna worked in Augusta, Georgia reporting and anchoring for WRDW and in Abilene, Texas where she covered breaking news and the crime and courts beat for KTXS. Her reporting experience dates back to her college days when she interned at WAGA FOX5 in Atlanta. She also worked alongside I-Team reporters, went undercover, and researched stories exposing fraud.

Most recently at News10, Trishna was honored to accept an Emmy Award for her reporting. She is also proud of her community involvement and has volunteered time with Big Brothers and Big Sisters of the Capital Region, HOPE Soars for Parkinson’s, and JDREF.

When she’s not at work Trishna enjoys spending time with her family.