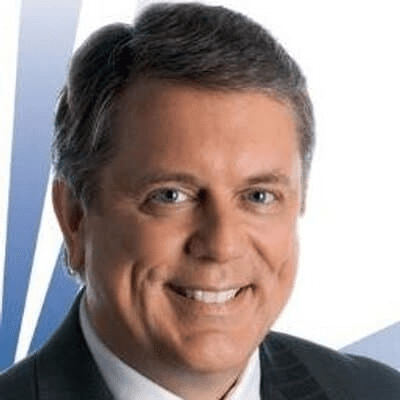 Tim Ryan is a media personality serving as the co-anchor of FOX 4’s Good Day morning show. He has been co-anchoring FOX 4’s Good Day since its inception in 1995. He plans to retire at the end of August 2022. Previously, he was a field reporter.

His age is unknown. He hasn’t also disclosed when he celebrates his birthday.

Ryan is American by nationality.

He graduated from California State University with a degree in Journalism.

Tim has been married to his wife Beth Ryan for over 35 years. On October 7, 2016, they celebrated their 32nd anniversary. The couple is also blessed with two children, Meghan and Patrick.

“My wife, Beth, and I are blessed to have the two greatest kids in the world. They’re all terribly patient with my long history of keeping such strange hours,” Tim said.

Their first grandchild, Lucy, was born in June 2022.

Ryan is a Good Day Anchor for FOX 4 NEWS. He has been co-anchoring FOX 4’s Good Day since its inception and continues to drag himself out of bed for four and a half hours of non-stop news and fun every weekday.

Most of his career in radio and television has been as a field reporter, with a mercifully brief stop in news management. In that time he’s been lucky enough to meet everything from politicians to prisoners, celebrities and newsmakers, and lots of ordinary people, who often prove to be the most interesting stories.

One of Good Day’s most popular weekly features is Friday morning’s “Tell it to Tim.” It’s irreverent and sometimes close to out-of-bounds.

“People tell me they can’t leave for work on Fridays until they’ve seen ‘Tell it to Tim,’ Ryan says. It’s strange but true.”

The most challenging part of the job, he adds, is also what makes it fun and interesting: It’s never the same.

Tim, the co-anchor of FOX 4’s Good Day morning show, plans to retire at the end of the month (August 2022). He made the announcement on Tuesday, August 2, 2022, saying it’s like jumping into the cold end of the pool. It always feels better once you get in.

His Good Day co-anchor Lauren Przybyl said, “I’m sad for us, but I know your family is so excited and I’m going to go ahead and start preparing. I’m gathering Kleenex for the next month or so.”

“You made Good Day Good Day and so we all feel so thankful for everything that you’ve done. It’s been 27 years of waking up early, early, early. I know your family, your wife and your kids and your new granddaughter just can’t wait to have more time with you.”

He’s known for his many cups of coffee from the same yellow mug, his now gray-haired bobble head and the often irreverent and sometimes close to out-of-bounds Friday morning segment, “Tell It to Tim.”

“I am grateful beyond words for my time here at FOX 4 and for the many wonderful people, I have come to know and respect as friends and colleagues. As a reporter, I have been privileged to travel the nation and the world; see amazing things and places, and meet people from every walk of life. The memories are unforgettable (and the stories get a little better every time I retell them.) Since 1995 I have been privileged to be a part of Good Day, which has become the ‘go-to’ place for morning news in DFW. To the thousands of viewers who treat us like family, “Thank you!” You are in very good hands with Lauren, Evan, Chip, and the amazing Good Day team.”

Once he’s retired, he plans to spend more time with his family members, travel, walk the dogs (a lot!), ride bikes (a lot!), and become involved in the community’s good works he is passionate about.

In July 2014, Tim apologized for annoying Meteorologist Jennifer Myers with a pizza offering.

Tim Ryan Salary and Net Worth