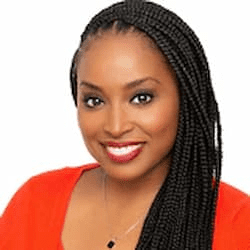 Tenikka Hughes is a media personality serving as an evening anchor at Action News Jax. She anchors the 5, 6, and 11 p.m. weekday newscasts on CBS47 and the 4, 6:30, and 10 p.m. newscasts on FOX30. Previously, she worked as a morning anchor and reporter with Action News Jacksonville’s sister station, WSOC-TV in Charlotte, North Carolina.

Hughes was born and raised in the small town of Whitakers, North Carolina. However, there is no information about her parents. She hasn’t also shared with the public whether she has siblings or not.

Hughes is happily married to her husband Timothy. However, there is very little information about him. On May 23, 2019, the couple celebrated their 5th anniversary in Hawaii. She hasn’t also disclosed whether she has kids or not.

Tenikka is an evening anchor at Action News Jax. She anchors the 5, 6, and 11 p.m. weekday newscasts on CBS47 and the 4, 6:30, and 10 p.m. newscasts on FOX30. Tenikka is a two-time Emmy Award-winning journalist and has received several honors from the Florida Association of Broadcast Journalists, including Best Anchor. She is also proud of her contribution to the Action News Jax team’s regional Edward R. Murrow Award for Overall Excellence in Large Market Television. Tenikka has a passion for storytelling and providing information that impacts the lives of viewers and their families. Her career in television news spans nearly 20 years. During that time, Tenikka has garnered a reputation for being a key contributor and compassionate leader.

Tenikka is a youth literacy and education advocate. She has volunteered countless hours speaking to children and reading at local schools, libraries, daycares, and community events. Tenikka is the driving force behind “Tenikka’s Books for Kids,” an annual book collection initiative that’s put nearly 20,000 free books in the hands of local children since its inception in 2018. The books are given to children who meet their summer reading goals while participating in the Jacksonville Library’s Summer Reading Program. As a result of her advocacy and service, Tenikka has been honored with the Mary J. Brogan Leadership Award from the Florida Literacy Coalition and the Media Friend of Education Award from the Florida State Chapter of Delta Kappa Gamma International Society for Key Women Educators.

Prior to making the move to the River City, Tenikka worked as a morning anchor and reporter with Action News Jacksonville’s sister station, WSOC-TV in Charlotte, North Carolina. She has also worked at stations in Memphis, Tennessee, and Macon, Georgia. Her work has been featured in a variety of national media outlets. Tenikka’s research has also been published in the Journal of Health Communication.

When not at work, Tenikka enjoys traveling and trying new restaurants with her husband.