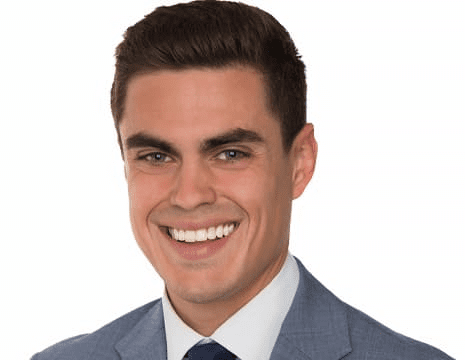 Grant is around 30 years old as of 2022. However, his birthday is unknown.

Grant graduated from Quinnipiac University with a Bachelor of Arts (BA) in Broadcast Journalism and a minor in Marketing in May 2014.

A New Hampshire native, Grant hasn’t shared any information about his parents with the public. He hasn’t also revealed whether he has siblings or not.

Robert is not married yet. However, he is in a relationship with his girlfriend Danielle Imbriano. Danielle celebrated her 29th birthday on April 16th, 2022.

Robert is a weekend morning anchor and reporter for Action News Jax. He joined the team in August 2020. During his time in Jacksonville, Robert covered the impacts of the COVID-19 pandemic, the trial of Ahmaud Arbery’s killers, and the growing pains that come with Northeast Florida’s population boom.

Before that, Robert reported in Knoxville, TN, where he was a multimedia journalist and weekend morning anchor. Robert was awarded an Emmy for his part in team coverage of a large trash fire that sparked evacuations and environmental concerns in North Knoxville.

Robert also won an Edward R. Murrow award for his work on an enterprise piece featuring Knoxville College’s solo graduate at its Summer 2019 ceremony. Knoxville College is a historically black school founded in 1875 but went through a decline in the 1970s. Robert highlighted the school’s work to turn around retention rates and rejuvenate the campus.

Robert also reported in the Black Hills of South Dakota for two years and anchored the station’s weekend evening shows. While there, Robert covered big stories including the Buffalo Roundup, Sturgis Motorcycle Rally, and surging meth rates on the Pine Ridge Reservation.

When not out reporting, you can usually find Robert on the golf course, at the gym, or hanging out with friends.