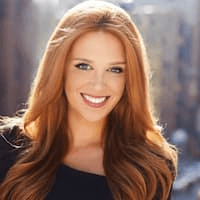 Stephanie Rivas is a media personality serving as a weekend morning News anchor and weekday reporter for News 10 ABC. She anchors the station’s morning Newscast at 6 am, 7 am, and 9 am. Previously, she was a multimedia journalist at CBS.

She was raised on the small island of Key West, Florida, in the United States. She may be around 30 years old. However, she has not disclosed the date, month, or the year she was born.

Stephanie is a recent graduate of New York University, where she received her Master’s in American Journalism. There, she learned the highest of journalistic standards and ethics, focusing on investigative stories that uncover hidden truths.

Despite being a media personality, she has managed to keep her personal life away from the limelight. Therefore, she has not disclosed information concerning her parents’ and siblings’ identities.

She got married to her loving husband Rick Guevara. The duo has been living a happy life for quite some time. However, there isn’t much information concerning her husband.

Stephanie is thrilled to join the News10 ABC team. She is a morning anchor for NEWS10.

Her passion for local news is rooted deeply in a personal commitment to her community. Stephanie is originally from the Southernmost tip of the U.S. in Key West, Florida. Although she’ll always be a “Conch,” she’s spent the last eight years as a proud New Yorker.

She spent several years as a content producer, on-camera host, and freelance multimedia journalist. Her work has been seen on Netflix, CBS, Business Insider, Southerly Magazine, and the Freedom News Network.

Additionally, she worked with American Patriotic Services, a non-profit organization that provides transition programs and morale services for veterans, active-duty military, first responders, and their families. As an ambassador, she traveled the world visiting military bases/hospitals and appearing on national morning shows, including the NBC Today Show, Fox and Friends, CNN, and more.

When Stephanie isn’t on the job for NEWS10, she enjoys going to the theatre, calling her family, and finding the best eats in town! For her, being a journalist is a calling, not just a job.