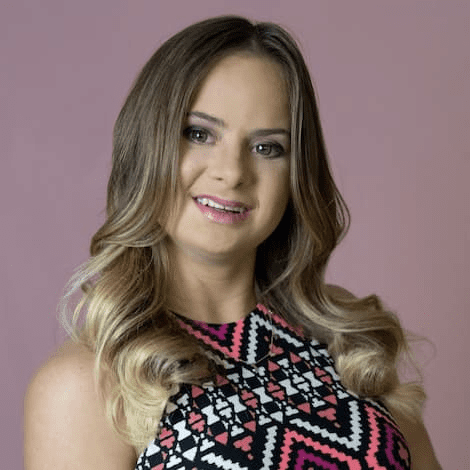 Sofia Jirau is a Fashion Model. She became known after being the first Victoria’s Secret model with Down syndrome. She also launched her own online store named “Alavett”, based on her favorite phrase “I love it” in 2019.

Sofia is short considering she has down syndrome. However, she is quite taller than others suffering from the same disease.

She is Puerto Rican.

She is the daughter of Frankie Jirau and Mimi Gonzalez. She is also the second eldest of four children.

Not much is known about her love life. However, as of September 2021, Sofia was in a relationship with a man named Chris. Chris is a chef, barista, and influencer. He is also the owner of CHRISin Limites Food Truck. In addition, he is a Motivational Speaker, Model, and Dancer.

Sofia is a Fashion Model. Recently, she is famous after becoming the first Victoria’s Secret model with Down syndrome. Victoria’s Secret is an American retail company. She began working as a model on March 26, 2019, her 23rd birthday. Since then, she has modeled for top designers.

On February 10, 2020, Sofia made her debut at New York Fashion Week. Her debut was covered by dozens of media outlets around the world, including Vogue Mexico, People, Hola!, Univision, and so on.

In 2019, Sofia also launched her own online store named “Alavett”, based on her favorite phrase “I love it.” She offers clothing, accessories, and home products. She also dreams of becoming an actress. In addition, works as an Experience Ambassador in the Puerto Rican company INprende, which has served as her supporter in fulfilling her dreams.

In an interview with People magazine, when asked who her fashion icon was, Sofia said Jennifer Lopez. She also stated that she wanted to meet her.

Her net worth ranges from $1 million to $5 million.