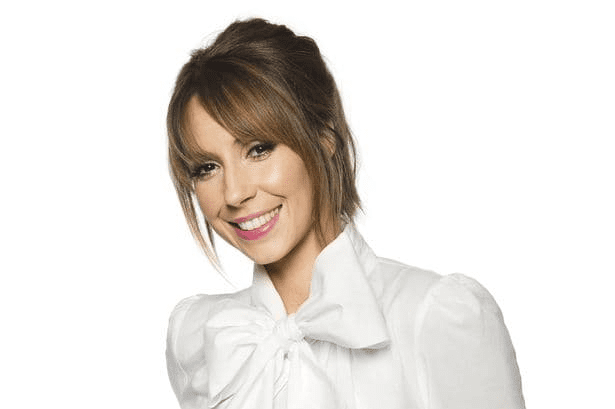 Alex Jones is a media personality serving as The One Show co-host on BBC One alongside Matt Baker. She joined the One Show in 2010.

Jones is British by nationality.

Jones graduated from the Department of Theatre, Film, and Television Studies at Aberystwyth University in 1998 with a BA in Drama.

Even though her first language at home was English, she was educated at a Welsh language school Maes yr Yrfa, and is fluent in Welsh. She also trained as a ballet dancer as a child. In addition, while sitting her final exams at Aberystwyth University in Magaluf, Spain, she also appeared as a contestant on the first series of Sky1 show Prickly Heat.

Jones was born in Ammanford, Carmarthenshire, to Mary and Alun Jones, and has a younger sister. At 39 years old, the star took part in a documentary all about fertility, after finding out her own mum had gone through early menopause, aged 44.

Alex is married to her husband Charlie Thomson, an insurance broker from New Zealand. They first met at a party in 2011. On December 31, 2015, they exchanged their wedding vows in Cardiff Castle.

Introducing their daughter on social media, Alex said: “We have some news………Our beautiful daughter came safely into the world on Saturday afternoon 21.08.21. Tiny, but perfectly formed we are all beyond happy and besotted by her, especially Ted and Kit.”

“Watching them with their brand new little sister is just the best and we can’t believe how lucky we are to have the 3 of them and to be a family of 5. It still doesn’t feel real!!! Thank you to everyone at the Queen Charlotte hospital for all your support again, especially super midwife Audrey,” she added.

Alex Jones The One Show

Alex co-hosts BBC One magazine Programme, The One Show alongside Matt Baker. As a fluent Welsh speaker, her television career began working for Welsh Channel S4C, where she presented the holiday show Tocyn; Chwa, a Welsh language extreme sports series; and Salon, a style and fashion programme.

In 2009 Alex took part in The Magnificent Seven, a BAFTA-winning series that saw seven celebrities travel to a ranch in Arizona to learn how to become cowboys. Whilst in the Wild West she recorded a spin-off children’s series called Alex and the Cowboys, also for S4C. During this time she also co-hosted ‘Jonathan’ with rugby legend Jonathan Davies during the 2010 Six Nations Championship, and was a regular presenter on Real Radio GMG, Wales’ largest commercial station.

Then in 2010, Alex joined The One Show and she hasn’t looked back since.

No. Gethin Jones is a Welsh television presenter, best known for Blue Peter, The One Show, and most recently Morning Live on BBC One, which he co-hosts with Kym Marsh.

Alex Jones Salary and Net Worth