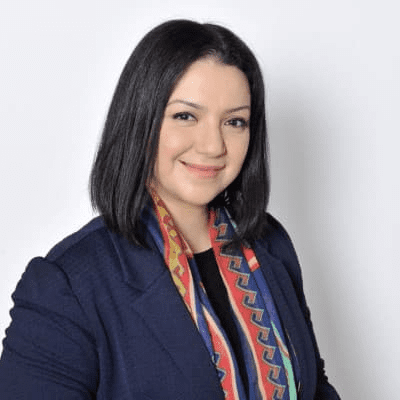 She hasn’t mentioned when she was born. Therefore her age is unknown.

Khalil holds British and Egyptian nationality. She also belongs to the Egyptian-British ethnicity.

In 2007, she graduated with a Master’s Degree in Broadcast Journalism from Westminister University.

Khalil grew up in an Egyptian military household. Her late father and her late grandfather were in the army.

Her father was a lieutenant colonel in the army and retired early for health reasons. “My earliest memories are of him taking and picking me up from school in his uniform,” Khalil said.

She added, “I remember he commanded so much respect from everyone around him. I think it was mainly his self-assured character, but I’m sure the uniform also helped. My father was also strict – very strict.”

Khalil’s father died at Alexandria’s biggest military hospital, the same hospital he was treated when he had his first heart attack.

However there no is much information about her mother.

She also has a sister even though not much is known about her.

She is married to Ahmed Zaki. However, it is not known whether the couple has children or not.

Nothing says #HappyAnniversary more than your husband applying your ear drops while you wail from the pain, dizzy with an infected right ear! Romance is alive and well! I love you Goooo I’m glad we did this all those years ago❤️ ⁦@AhmedZaky⁩ pic.twitter.com/9MFgQFPwsO

Khalil is an award-winning journalist who’s worked for the BBC for more than ten years.

In 2012, she was appointed as the BBC World Service Middle East Regional Editor. She reported extensively on the Middle East during the Arab Spring, especially from her home country Egypt where she made a radio documentary series called ‘Egypt’s Challenge’ exploring where her country’s society, politics, and economy stood when the Muslim Brotherhood was in power.

Since then she has reported across the Middles East, including in Iraq, Libya, Yemen, Saudi Arabia, Kuwait, and Jordan. In 2013 she was appointed as lead presenter on BBC World Service Radio’s morning news program ‘Newsday’.

In 2014, Shaimaa was appointed as the BBC’s Pakistan Correspondent, during her two years in the country she reported on some of the biggest news stories there including the Peshawar school massacre. She also reported from neighboring Afghanistan during that period. In the same year, she won the AIB award for International Radio Personality of the Year.

In 2016, Shaimaa was part of the BBC team reporting on the start of the military campaign to liberate Mosul from ISIS. She was also one of the main presenters covering the US Elections 2016.

Shaimaa is one of the lead presenters on the BBC World Service’s morning news program, ‘Newsday’ which is the world’s biggest breakfast news program. She is also BBC News’ Australia correspondent since November 2019.

In August 2011, while Shaimaa was covering the Arab Spring in her home country Egypt, she was detained by the military in Tahrir Square.

Before she was detained, she wrote on her Twitter account, “someone has warned me that they detain anyone who is taking pictures.”

She was taken to the prosecution to be interrogated. However, she was released after spending the night in detention.

On October 29, 2017, Shaimaa wrote about her first experience of harassment as a child growing up in Egypt.

“There’s one particular day – soon after I turned 11 – that I can’t forget. I was at my grandparents’ house and for the first time I’d been allowed to go out with a cousin and her friend, without any adults – three girls on our own, out on our first adventure.”

“I was excited but nervous. This needed to go well if I was to stand a chance of ever going out on my own!”

“In the busy summer streets of Alexandria, we hadn’t realized we were being followed. But three boys walking behind started bumping into us. Then one of them groped me. All I could do to escape our tormentors was walk ahead as fast as I could, with my cousin and her friend trying to catch up. But they kept following us.”

“The three of us held hands and rushed back toward my grandparents’ house. The boys were right behind. Now verbally harassing us. I was frightened, but also angry. These boys had ruined my big day. I turned around and yelled: “Kifaya! Enough!”

Shaimaa Khalil Salary and Net Worth