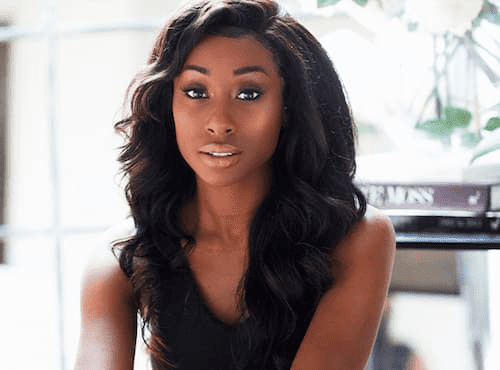 Scarlette Douglas is an Award-Winning TV Presenter for Channel 4’s A Place in the Sun, as well as a reporter for BBC’s The One Show and Points of View. After seven years, she confirmed on August 10, 2022, that she is stepping away from the Channel 4 show. She will also be fronting a new property show called Worst House on the Street alongside her brother, Stuart Douglas.

From 1998 – 2003, Scarlette attended Turnford Senior School. She also graduated from Laine Theatre Arts with a Diploma in Musical Theatre, Singing, Dancing, Acting, and Modelling in 2006.

Scarlette’s parents are Joe and Bev. They moved from Jamaica to the UK. Her father is the pioneer of the first legal urban radio station, Wicked Neutral & Kicking Radio which played urban, soul & Reggae tunes.

She grew up in Cheshunt, Hertfordshire alongside her two brothers. She also has a new show in which she co-hosts alongside her brother Stuart.

In Love it or List it, Scarlette will be competing with her brother on the show to convince homeowners to up sticks and move elsewhere while Stuart will be renovating the homes to convince them to stay.

“My brother is a massive character so I always knew he would be great at coming into my world,” she said. “But he does like to talk a lot.

“I thought I talked a lot but he’s on a whole new level. I have to be like ‘bro, can you just stop now?’

“We do have that sibling thing where the older brother is going to take the lead, but he does talk too much. We laugh about it though.”

Stuart, 41, used to be a professional footballer and although he has been running a successful property development, interior design, and renovation business for 15 years, he has no TV hosting experience.

Scarlette is in a relationship with Lyndrik Xela, a Manchester-born musician who is also a former The Voice contestant. He released his debut EP last year, and his Spotify bio describes him as “a multifaceted singer, songwriter, producer, and performer”.

The couple has been reportedly dating since the beginning of 2020, although they actually met more than a decade ago when they starred alongside each other in the West End show Thriller Live in 2009.

“We’ve been together since [the first] lockdown and we’ve known each other for years and but have now got together,” Scarlette said. “But it’s a bit tricky going away because I’m leaving him at home and he’s doing his thing and I’m away. My hours can be crazy sometimes so I guess that’s what’s hard.”

Scarlette is one of the presenters for Channel 4’s ‘A Place in the Sun’, as well as a reporter for BBC’s The One Show and Points of View.

A performer at heart, Scarlette has appeared in a vast array of musicals all over the world, her final one being the X Factor West End Musical ‘I Can’t Sing’ produced by SYCO. She took part in Ant and Dec’s Saturday Night Takeaway TV show, as well as their UK arena tour and has featured on a variety of other TV programs such as Stars in your Eyes, A League of Their Own, The Paul O’Grady Show, Children in Need, The Alan Titchmarsh Show, Dancing on Ice and many others.

Since leaving college, Scarlette has mainly worked as a Musical Theatre performer, starring in numerous West End shows and tours, alongside dancing in many Blockbuster Feature Films. Her talent does not end there, however; Scarlette has modeled for various Fashion Designers, Hair Stylists, Makeup Artists, and Labels, sang in various Girl Groups, choreographed shows, and backing danced for the likes of CeeLo Green, Paloma Faith, Craig David and the Two and Only; Ant and Dec! She even supported our 2015 Eurovision Song Contest entry as a backing singer and dancer. Since working professionally in these fields for over 10 years, Scarlette is now working hard on her presenting career.

Scarlette was named runner-up in the 2011 worldwide search for the ‘Next big name in Hosting’, an opportunity to go to Los Angeles to interview celebs on the red carpet, and before this, was crowned the winner of a nationwide competition with MTV and Freederm to be a ‘Presenter for a Week’. This gave her a great opportunity to spend an entire week experiencing life as an MTV presenter and had her very own news bulletin aired to the nation for MTV News.

Scarlette presented for Virgin Media Pioneers at V Festival in 2013 and has most recently set up her own TV production company, Two Of A Kind Productions, which has produced a brand new and exciting YouTube Channel based on bringing unknown talent to the forefront.

Excitingly in 2015, Scarlette was picked to present on A Place in the Sun, beating many who were also seen for the role. With a passion for property development, Scarlette wowed producers with her knowledge and presenting skills.

In 2016, Scarlette and AudioBoom teamed up to bring an exciting new podcast to our ears. ‘Motivation Mixtape’ was a short series of interviews with Olympian and Paralympian athletes on their road to Rio. It discussed their highs, lows, sacrifices, and mainly the songs they listened to get motivated. Scarlette’s husky tones have landed her not just podcasts, but many other voices overs ranging from radio promos and television promos to TV shows and adverts. She is now the voice of Capital Xtra, BET, and MTV Movies.

Scarlette also hosts live events and was chosen to be one of two hosts at Stylist Magazine’s huge exhibition event ‘Stylist Live’ back in October 2016. Here she was the main host on the Stylist Stage, interviewing some of the country’s most inspiring women, including Cherry Healey, Sophie Ellis-Bexter, Mel C, and Olympian Gold Medallists Helen Glover and Helen Stanning. Due to her role at Stylist Live, Scarlette was then asked to be a key speaker at Cosmopolitan’s Self-Made Summit in 2018.

Douglas has been a presenter on A Place in the Sun since 2015, and during that time she has helped a number of house hunters to find their dream holiday homes. However, her experience with property goes beyond the Channel 4 series, as she also helps to run the family business with her brother, Stuart Douglas. The duo even landed their first presenting job together as part of Channel 4’s Black to Front campaign.

Last year, Douglas and her brother put their expertise to good use by taking the reins on a special version of the hit property show, Love it or List it, which is usually fronted by Kirstie Allsopp and Phil Spencer.

However, it looks like the duo will be back presenting together very soon after Channel 4 confirmed they would be fronting a new property show called Worst House on the Street.

The new series, which will air in September, will see the siblings helping families to transform their run-down houses into dream properties.

Speaking about the new show, Douglas and Stuart began: “Over many years, we have honed the skill of redeveloping properties whilst extracting the most value from the finances available.”

Senior commissioning editor for Channel 4, Clemency Green went on to add: “Everyone is under pressure to make their money go further these days.

“Scarlette and Stuart will demonstrate how, with some tried and tested tricks, it is possible to renovate the worst house to the best house on the street.”

“Soooo the good news is out!!!!,” the property expert began.

“I have a brand new property show with my brother @stuartdouglas9! Our very own, 6-episode series that airs September 15th at 8 pm!” (sic)

Scarlette Douglas A Place in the Sun

Douglas, A PLACE IN THE SUN presenter has confirmed she is stepping away from the Channel 4 show after seven years.

Douglas rose to fame on the travel property program A Place in the Sun seven years ago. Ever since joining the team, the expert has helped several house hunters to find their dream holiday home abroad. However, in her recent social media post, she confirmed Wednesday’s installment would be her last ever show.

Sharing a video of her time on the program, Douglas wrote: “After 7 years, my final ever episode of @aplaceinthesun airs today at 3 pm!

“It’s the end of an era! I hope you’ve enjoyed my outfits, my crazy shoes, funky hairstyles & fun personality!

“I’m sure the repeats will keep on coming but there’s plenty of other goodness coming your way!” (sic)

Douglas, who has starred in a number of West End shows, claimed that while working in musical theatre she was told she was “too fat”. More shockingly, it was suggested that if she didn’t lose weight, she would lose her job.

The presenter made her comments during a chat with her co-stars Jasmine Harman and Laura Hamilton.

She said of her time at college: “Every month for three years we got weighed and if you were overweight you had to see a nutritionist, who put us on some crazy diet, eating seeds.

“When I did musical theatre, people told me I was too fat and if I didn’t lose weight, I’d lose my job,” she told The Sun.

She went on to say that she has “really struggled” being in front of the camera in the past because of her insecurities.

“I’ve definitely had periods during my years on the show when I’ve really struggled because TV adds pounds.

“I’ve always had an issue with my weight,” she added.