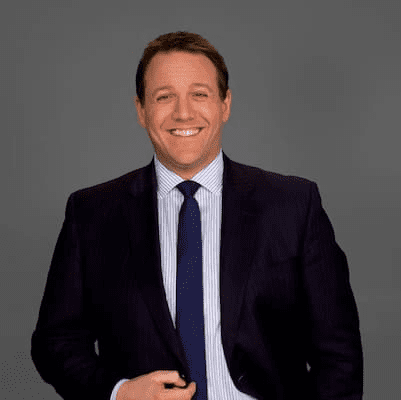 Ryan Peterson is a media personality serving as a morning anchor at WTEN-TV. He co-anchors News 10 ABC in the Morning with Christina Arangio from 5-7 a.m. Previously, he was an anchor and reporter for Time Warner Cable’s 24-hour local news network for New York State

His age is unknown. He has not disclosed information concerning the date, month, or year he was born.

Peterson is an American by Nationality

He attended Pittsfield High School from 1990 to 1994. He then joined saint Michael’s College and graduated in 1998 with a bachelor’s degree in journalism.

Peterson was born and raised by his parents in the United States. However, there is no information concerning his parents’ and siblings’ identities.

Ryan is married to Amy Peterson who is from up the road in Waterford. The couple is blessed with two daughters, Olivia and Reese, and one son Charlie. They are excited to be back home in the Capital Region

From crime to the arts, from politics to the circus, he has covered it all.

He comes home to the Capital Region by way of WNCT – 9 On Your Side, in Greenville, NC. He spent the last two years in eastern North Carolina anchoring Morning Edition for the CBS affiliate.

Prior to that, he was an anchor and reporter for Time Warner Cable’s 24-hour local news network for New York State. A charter employee, Ryan joined what was then Capital News 9 as a bureau reporter in 2002. He quickly rose through the ranks and became an anchor in 2006. In addition to his duties on the desk, he hosted the weekly home improvement/real estate segment, “Your Home.”

He began his broadcast career in New York City in 1999 as an NBC Page. During his tenure at the “peacock,” Ryan worked on such shows as NBC Nightly News, Late Night with Conan O’Brien, the Rosie O’Donnell Show, and the legendary Saturday Night Live. Ryan then moved 20 blocks north of “30 Rock” to the home of ABC News where he worked as a production coordinator for the news magazines, 20/20 and PrimeTime. While there Ryan worked on the network’s 24-hour coverage of the millennium celebration and the aftermath of September 11th.