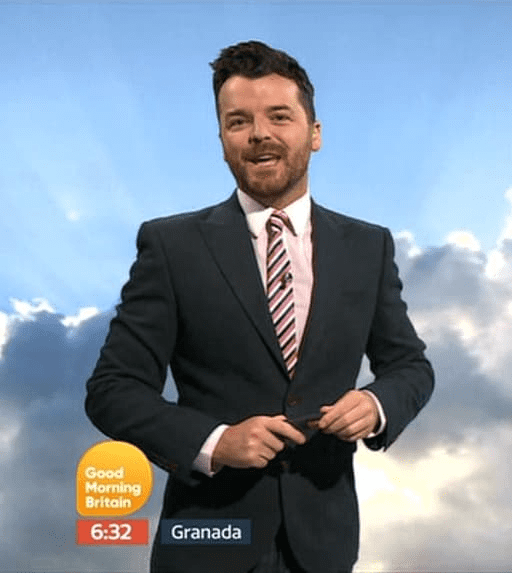 Ross Hutchinson is a media personality serving as a weather presenter for ITV Tyne Tees and ITV Border. He started his broadcast career as a journalist before moving to the weather in 2010.

Ross has a sister. “As kids, my sister and I would always get up around 5 am, pestering our parents with the famous question: “Has Santa been?” I’m glad to say that I’ve chilled out a lot since then. Now, my family tends to get together on Boxing Day instead, and I’ll spend the big day itself with friends. It’s a very relaxed affair: I’ll host, but everyone gets involved with the cooking. Though the meal usually ends up on the table three hours later than planned! We’ll open presents afterward,” he said.

“My family wasn’t too big on tradition and I’m the same now. The dogs will be walked first thing in the morning and we’ll drink Buck’s Fizz at breakfast. The rest of the day happens as it happens. It really does take the stress out of it!” he added.

Despite being a media personality, Ross has managed to keep his personal life away from the limelight. Therefore, it is not known whether he is married, single, or in a relationship.

Getting my wedding on.. Well not my wedding.. #BestFriend pic.twitter.com/kNRtXxL3

He also married his best friends Becky and George in a Humanist Ceremony in 2019.

Hutchinson is a weather presenter for ITV Tyne Tees and ITV Border. He settled in the North East after spending time working in London and East Anglia.

He started his broadcast career as a journalist before moving to the weather in 2010. After training with the Met Office Hutchinson took up his position with ITV Tyne Tees and Border and has never looked back. The job has been varied, to say the least! Wing-walking, skydiving, and rubbing sun cream into pigs are all in a day’s work.

Hutchinson has a great love of the outdoors, nature, and the environment. When he is not in the studio you will most likely find him outside, either walking Oscar the dog or at the allotment with his chickens.

Ross Hutchinson Salary and Net Worth